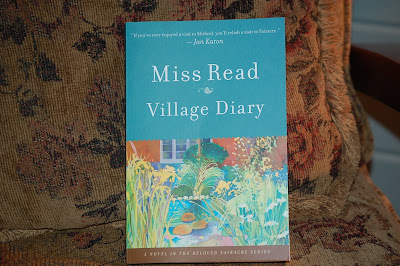 This second book in Miss Read's Fairacre series is even better than the first. Village School was more of a record, even a report in some ways. Now we know the characters, the village, and the school as we begin our second year in Fairacre. There is more humor, of the Provincial Lady sort. The crabby Mrs Pringle helped Miss Read with a little cleaning:

To hear her disparaging comments on the condition of the backs of the bookcases, and the loot that she extracted from the sides of the arm-chairs, one might wonder why I hadn't died of typhus.

When Miss Read, a very new driver, comes upon three children in the middle of the road "popping tar bubbles," she scolds them. The young boy says,

'We wasn't doing no harm' to which Miss Read retorts: 'You wasn't doing no good either.' ... it wasn't until I had changed into third gear, and was cooling down slightly, that my ungrammatical echo burst fully upon me.

Miss Read has given a lecture to the students about saving a little money "for a rainy day." She is then appalled at the state of her own finances.

'Always put a little by!' as I told my children firmly last week ... Sometimes I wonder that a bolt from heaven doesn't strike me.

Village Diary contains many observances on the rapidly changing village life; fears that the young will move away from the country, concerns that the 'new' people are attending all the village meetings and the old-time residents are staying home, worries about old people not having enough money to live on, and the lack of small, affordable housing for the residents.

Yet, this is only part of the story, as these things are only part of real life. There is also delight in nature, and great contentment in the daily life of the villagers.

With all the windows in the house opened, I sat down with my tea tray and thought how lovely it was to be back. I feel like a sword in a scabbard, I told myself, and instantly decided that a sword was much too dashing. Perhaps a cup, hanging again on its accustomed hook on the kitchen dresser, would be a better simile. At any rate, to be a village school-mistress, with a fine border of pinks just breaking before me, and the sound of rooks cawing overhead, seemed a very right and proper thing to be, and I envied no man.

I find both the character, Miss Read, and the author, Miss Read (Dora Jessie Saint) to be sensible, honest, clear-headed. She (they) see both sides of all controversies that pop up in this village. The characters are so real, and so distinct one from another, that as the books go along the reader gets to know and care for each one as a person. I own another in the series, Storm in the Village. As much as I'd like to dive right into it, I'm going to wait a little while. These are beautiful paperback editions, and in time I hope to own them all, since they are books I will happily read over again. I also have on my shelves the first two in Miss Read's Thrush Green series, and I'm sure there will be book reports coming up on them as the year unfolds.
Posted by Nan