Popovers are a treat I cannot count on. Sometimes they are perfect - right out of a bakery shop window perfect, but with better taste. Sometimes they completely and literally flop. They don't rise and they are doughy inside; a treat only for the dogs who don't seem to mind a bit. Most often they are somewhere in between great and terrible - simply okay. Not too high and a little bit doughy. I've tried a lot of recipes over the years, and the one which has worked the most consistently is from The Joy of Cooking which I posted here.

The past couple times we made them, they weren't good, so when Tara left a comment saying she got a new popover pan, I asked her to let me know how they come out. She wrote back to say they turned out great, so I asked for and received the recipe. It turns out to be the same, except for 1/2 t. salt instead of 1/4 t. But there are some differences in preparation. And those little differences created some great popovers which we had with leek and potato soup last night. I'm calling them:

First off, don't use a mixer.

Whisk together 1 cup milk and 2 eggs

Preheat oven to 450º F.
While it is preheating, put 1/2 t. vegetable oil (I used olive) into each popover cup. I don't have Tara's pan, so still am using the custard cups.
Put the cups in the oven to warm them.
Remove and put in the batter. We used 7 custard cups, filling them about half-full.
Put into oven and bake for 20 minutes.
Turn down heat to 350º F. and bake another 15-18 minutes.

The last part is where it gets a bit tricky. Your own oven and ingredients and who knows what else determines the time. I think we took ours out just a smidgen too soon because we feared them getting too dark.

Anyhow, they were absolutely delicious, and I thank you, Tara! 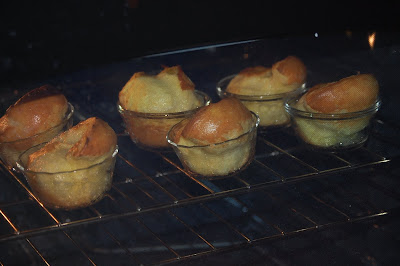 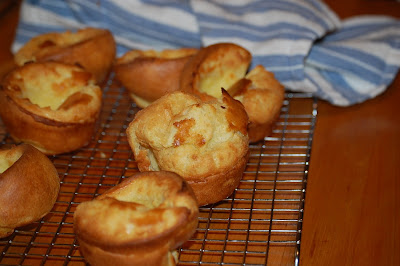 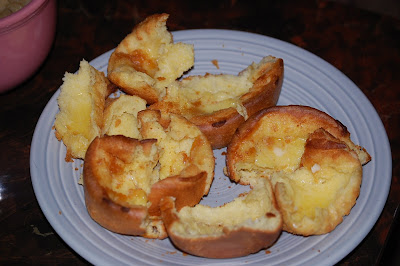