The London Scene by Virginia Woolf 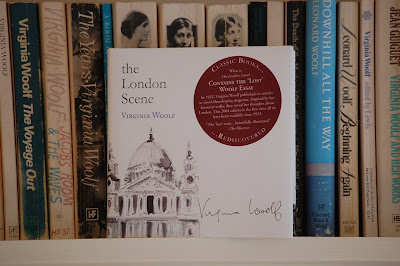 
Today is the 127th anniversary of Virginia Woolf's birth. Many years I celebrate in my own little way by reading something by her or about her. The past two years have been about her: (2007 and 2008) and this year I chose a little book of essays by the author. These were written in 1931, and published in Good Housekeeping magazine over several months time in 1931 and 1932. Can you imagine seeing an essay by Virginia Woolf in a magazine at the grocery store checkout?! Think of it! So many of the great, great writers were published in a variety of magazines. Now those same magazines feature a recipe on one page and a diet plan on the next.

Each of these six essays talks about London. She writes about the docks and the churches and the houses of famous people. Exactly four decades after she visited Thomas and Jane Carlyle's house, and John Keats' house, Tom and I entered those very places. At that time in our lives we had newly discovered Virginia Woolf, as we had Carlyle and Keats. Those houses were shrines to our English- literature-major selves. After all this time, I can still remember the interiors and even how I felt there.

Virginia Woolf brings an attention, a focus to the familiar and the commonplace. She really sees. And she really thinks about what she is seeing, and what she isn't able to see anymore. Writing about the riverside:

When suddenly, after acres and acres of this desolation one floats past an old stone house standing in a real field, with real trees growing in clumps, the sight is disconcerting. Can it be possible that there is earth, that there once were fields and crops beneath this desolation and disorder? Trees and fields seem to survive incongruously like a sample of another civilisation among the wall-paper factories and soap factories that have stamped out old lawns and terraces. Still more incongruously one passes an old grey country church which still rings its bells, and keeps its churchyard green as if country people were still coming across the fields to service.

Virginia Woolf's work deals with this very idea: the passing of time and the changes that come with its passing, both on people and on landscape. Not everyone can or will think of these things. Most of us bustle along in our daily lives not really noticing a house being torn down to put up yet another gas station/mini mart or a road widened and decreasing the spacious green lawns of old houses. When the changes come, we forget so quickly how the landscape used to look. When a local man dies, we soon forget how he used to walk every morning down the same streets swinging his arms with strength and vigor. Virginia does not forget. She remembers things she never even saw or knew. She thinks about past and present and future.

When she visits the homes of those great dead writers, she tells us that "all houses have voices."

Take the Carlyles, for instance. One hour spent in 5 Cheyne Row will tell us more about them and their lives than we can learn from all the biographies. Go down into the kitchen. There, in two seconds, one is made acquainted with a fact that escaped the attention of Froude, and yet was of incalculable importance - they had no water laid on. Every drop that the Carlyles used had to be pumped by hand by a well in the kitchen. And here, too, is the wide and wasteful old grate upon which all kettles had to be boiled if they wanted a hot bath.

She goes on in great detail describing their lives and how they lived them, and ends by saying:

It is impossible not to believe that half their quarrels might have been spared and their lives immeasurably sweetened if only number 5 Cheyne Row had possessed, as the house agents put it, bath, h. and c., gas fires in the bedrooms, all modern conveniences and indoor sanitation. But then, we reflect, as we cross the worn threshold, Carlyle with hot water laid on would not have been Carlyle; and Mrs, Carlyle without bugs to kill would have been a different woman from the one we know.

These are the very things that interest me when I visit a house; whether touring an historical home, or visiting a present-day friend. I notice things like this. I think about how they live(d) inside their structure, and that the very home they inhabit is part and parcel with who they are. At the top of my Persephone wish list is a book by Thea Holme called The Carlyles at Home, which was written thirty years after Virginia Woolf's visit, and ten years before mine.

I could go on and on quoting the wonderful writing, but then my book report would be longer than this little book of essays. If you haven't ever encountered Virginia Woolf, this is an excellent place to start. If she is an old literary friend, these "vignettes" will add to your knowledge and admiration of her work. As always, she takes my breath away with her depth of understanding and as I noted before, her observation. For those who know London, this is an enjoyable look back at the city before the Second World War. I think you will be surprised at how 'modern' some of her thoughts are: traffic complaints, crowded conditions, people so busy that they have no time to think about the big subjects. "The mere process of keeping alive needs all our energy."

The first five essays were collected and published twice before, but this is the first time the sixth "scene," The Portrait of a Londoner, has been included. This is a special little book, enhanced by the illustrations of Suzanne Barton.

If you have a minute on this special day, and are so inclined, here is what Virginia wrote about her 1915 birthday.
Posted by Nan