Death in the Morning by Sheila Radley 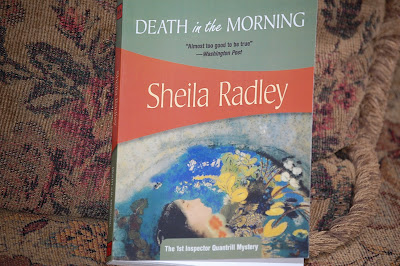 I hardly ever guess whodunit in a murder mystery, but I did in Death in the Morning, and far from being disappointed in the book because I guessed, I am completely delighted. When the first solid clue appeared on the page, very, very near the end, I smiled and said, right out loud, 'ah.' Not only was I correct, but it was the person I wanted to be responsible. Isn't it funny when you read along in a book and take a dislike to a character, and think wouldn't it be nice if that one were guilty? No doubt, this is why so many read detective novels. Real life rarely affords this particular pleasure.

It was interesting to read Death in the Morning directly upon finishing Village Diary, because it too is set in a little English village just about twenty years later. Miss Read felt lucky that the Fairacre school had two teachers.

The biggest difficulty in these one-teacher schools is the age-range from babes of five years old to children ready for secondary education at the age of eleven. Conscientious teachers who have tackled this type of school single-handed, year after year, realize how impossible it is to do justice to each child.

Chief Inspector Quantrill, in Death in the Morning, is a product of that very situation:

where one harassed teacher had had to cope with thirty children whose ages ranged from five to fourteen, he'd been handicapped educationally from the start...

Some of the concerns Miss Read had in the late 1950s have come to be realities in the 1970s. The little village has become much larger, with housing estates for the poor, and housing developments for the rich. A teacher says,

I can't communicate with most of the children. They aren't even local, most of them, they've been brought from London to live on the new estates. They've been uprooted, disoriented, and they feel anonymous and unwanted. They hate the town, and they hate school because what we try to teach them seems irrelevant.

Quite a difference from Miss Read's students, who are so rooted in their communities and their landscape. Toward the end of Village Diary, Miss Read muses:

I felt, perhaps more keenly than ever before, just what it means to be a villager - someone whose welfare is of interest (sometimes of unwelcome interest) to one's neighbours - but always to matter. It was a warming thought - to be part of a small, living community, 'members one of another,' so closely linked by ties of kinship, work and the parish boundaries...

Twenty years later, and of course because Death in the Morning is a mystery, the reader sees another side to this life.

Villages can be unpleasant places to live in. I expect you think that country life's idyllic, but you'll soon find that there's a surprising amount of spare hatred about. ... In a village, you see, everybody is expected to be the same - anyone who gets on in the world is disliked for it.

On the first of May, an eighteen-year old girl's body is found in a shallow stream. She's wearing a long dress and is surrounded by picked flowers. To the literary minded, she is reminiscent of Ophelia in Hamlet, and this story comes to play its own special part in the book. The village is peopled by those who all loved the girl, who was heading off to Cambridge, so it could not have been murder, right? She must have slipped and fallen as she gathered flowers on May Day. Yet, there are many questions. Why did her mother burn some of her possessions? Was her brother resentful because she was going to get the education he was supposed to receive before life took a different turn? And what about all these people who used to give her rides everywhere because she had no 'transport' of her own?

Chief Inspector Quantrill is a wonderfully drawn character, and we learn a lot about him in this first book in the series. We also meet the highly educated young Detective Sergeant Tait, who is unhappy about his posting in this little place where he fears his talents will be wasted. The reader learns how this area has changed over the years until it is almost unrecognizable to someone who has come back to live here. I so much enjoyed this excellent mystery, and look forward to reading more in the series by Sheila Radley. I want to know more about this thoughtful policeman and how he copes with the demands of work and family. I can see the relationship between Quantrill and Tait developing into a real partnership, with each of them bringing their own particular strengths to the solving of crime.

In these times of bookstores closing and dire reports of dwindling readership, Felony & Mayhem is a shining light. I mentioned this publishing house recently as it also published Robert Barnard's The Skeleton in the Grass. I have a few others on the shelves to read this year. They are beautiful editions with good covers, fine paper, and best of all great writing within the pages. You may take a look at their homepage and see all they have to offer to us lucky readers.
Posted by Nan