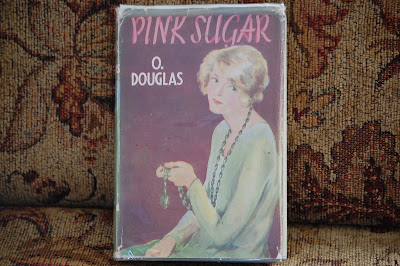 
"There is something to be said for the pink sugar view of life" Colonel Archie Home tells his tenant and main character of this book, Kirsty Gilmour.

"Pink sugar!" cried Kirsty, and laughed a little. "It's odd you should say that. When I was a child I was taken once to a market held in a little town. I was allowed to ride on a merry-go-round and gaze at all the wonders. But what I wanted most of all I wasn't allowed to have. At the stalls they were selling large pink sugar hearts, and I never wanted anything so much in my life, but when I begged for one I was told they weren't wholesome and I couldn't have one. I didn't want to eat it... I wanted to keep it and adore it because of its pinkness and its sweetness. Ever since that day when I was taken home begrimed with weeping for a 'heart,' I have had a weakness for pink sugar. And good gracious, surely we want every crumb of pink sugar that we can get in this world. I do hate people who sneer at sentiment. What is sentiment after all? It's only a word for all that is decent and kind and loving in these warped little lives of ours."

Kirsty is a woman of thirty years who hasn't had much 'pink sugar' in her life. After her mother's death her father remarried, and then he died when she was eight. She was away at school until seventeen, and then traveled around with her stepmother until the woman dies six months before the book begins. A friend of Kirsty's comments on the stepmother.

the smooth sweet voice that could say such cruel things ... her absolute carelessness as to the feelings of others.

Now Kirsty has settled down, and is leasing a house in her home country of Scotland, where she hasn't lived since her father's death. She is blissfully happy. She loves her house, the hills, the village. Pink Sugar tells the story of the first several months of Kirsty's new life. She takes in three children whose mother has died and whose father has gone traveling to ease his despair. They are great joys to Kirsty. Her older aunt comes to live with her, and they share cozy times reading and having tea in front of the fire. She feels the deepest contentment in her chosen life. She becomes friends with a local writer who is probably expressing O. Douglas' own sentiments here:

... in the War... the thought came to me to write a book, something very simple that would make pleasant reading - you see there's nothing of Art for Art's sake about me. I thought of all the sad people, and the tired and anxious people, and the sick people. Have you ever had any one lie very ill in a nursing home while you haunted libraries and bookshops for something that would help through sleepless nights for him? If you have, you will know how difficult it is to get the right kind of books. Merely clever books are of no use, for a very sick person has done with cleverness. You need a book very much less and very much more than that. ... The world is full of simple plain people who like plain things, and who are often bewildered and unhappy. Perhaps my books are a sort of soothing syrup: I don't know.

Life isn't all cheery, as it never is. There is poverty; there are grim lives; there is illness and death among the people. Though Kirsty is bright and gregarious, she is not always liked or appreciated by others. When she is rudely criticized, she doesn't just get mad at the person. She considers what has been said, and often finds the words are what she calls "home truths." She is willing to learn about others and about herself and she grows to understand herself better in the pages of this book.

There are two books that have a particular affinity with Pink Sugar in my reader's heart: My Dear Aunt Flora by Elizabeth Cadell and The Quiet Hills by Iris Bromige. They share the motif of nature and home offering solace, strength, renewal, healing. It is a favorite theme for me, and has been for as long as I can remember.

O. Douglas was Anna Buchan, and if that name sounds familiar, it is because she was the sister of John Buchan, renowned statesman and writer. The greatest joy of my self-imposed ban on buying or borrowing books this year is 'finding' books such as Pink Sugar on my shelves. I bought it several years ago from anglophile books, and have walked by it so often thinking, I really must read that lovely little book. Now I have and am so very happy to have made the acquaintance of O. Douglas. There's another of her books in an antique shop in town. I hope it will still be there in 2010. Or maybe I could ask Tom to get it for me for my birthday.
Posted by Nan