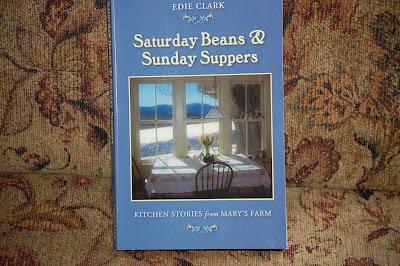 One of my favorite books from last year is Saturday Beans & Sunday Suppers by Edie Clark, a wonderful travel through her life via food. Her chapter titles are the decades from The Sixties through The Nineties & Beyond. This is one of those books I'll store with my cookbooks. Some others of the same ilk are two Evelyn Birkby books - Up a Country Lane Cookbook and Neighboring on the Air; and At Grandmother's Table edited by Ellen Perry Berkeley.

The first recipe I tried from Edie Clark's book is pizza crust. I've been making the same crust for many, many years now. It's an adaptation of a friend's recipe, and it has always served me well. Yet when I read about this one, I thought I'd give it a try. The recipe which follows is a little different from hers, but still close enough to call it:

Dissolve 2 1/2 teaspoons baking yeast in a cup of warm water, with a little sugar added (maybe a teaspoon).

In the electric mixer, at low speed, mix together:
1 cup whole wheat flour - Addendum: in 2012 I started using all white. And 2 1/2 cups rather than 2. It is perfect.
1 cup white (unbleached) flour
1/4 cup cornmeal
1 teaspoon salt
1 Tablespoon olive oil

When the yeast is bubbly, add it to dry mix. Stir well.
Cover with a damp cloth and let rise in a warm place for about an hour.
Spread on greased pizza pan or cookie sheet.
Top with sauce and any veggies and/or cheese that you wish. (Tom sprinkles a little black pepper on his side).
Bake at 375º F. until crust is slightly browned and cheese is done to your satisfaction - maybe 30 minutes.

We both like this thin crust so much that it is the only recipe I use now.

Everyone has their own special way of making tomato sauce. Some like it chunky, some smooth, some with vegetables added. I noted in the other pizza recipe (under main meals on the sidebar) how I make my own sauce. But here it is again. I use either Muir Glen or Bionaturæ canned crushed tomatoes and Bionaturæ tomato paste.

2 28-ounce cans tomatoes put through the food mill
2 7-ounce jars tomato paste
handful or more of basil
about a T. salt
onions and garlic which has been sautéd in 1/4 cup olive oil

For tonight's pizza, I sautéd some shallots and zucchini to put on the top. And, as I may have mentioned (like a hundred times!) I don't like cheese, so we divide ours into his and her halves. :<) 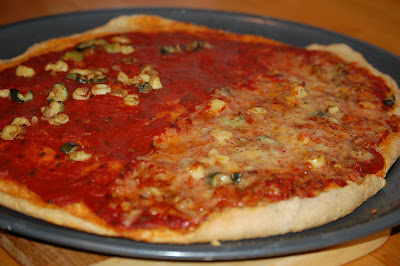