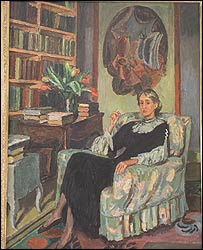 My birthday, - & let me count up all the things I had. L. had sworn he would give me nothing, & like a good wife, I believed him. But he crept into my bed, with a little parcel, which was a beautiful green purse. And he brought up breakfast, with a paper which announced a naval victory (we have sunk a German battle ship) & a square brown parcel, with The Abbot in it - a lovely first edition- So I had a very merry & pleasing morning - which indeed was only surpassed by the afternoon. I was then taken up to town, free of charge, & given a treat, first at a Picture Palace, & then to Buszards. I don't think I've had a birthday treat for 10 years; & it felt like one too - being a frosty day, everything brisk & cheerful, as it should be, but never is. The Picture Palace was a little disappointing - as we never got to the War pictures, after waiting 1 hour & a half. But to make up, we exactly caught a non-stop train, & I have been very happy reading father on Pope, which is very witty & bright - without a single dead sentence in it. In fact, I don't know when I have enjoyed a birthday so much - not since I was a child anyhow. Sitting at tea, we decided three things: in the first place to take Hogarth, if we can get it; in the second, to buy a Printing press; in the third to buy a Bull dog, probably called John. I am very much excited at the idea of all three - particularly the press. I was also given a packet of sweets to bring home.
Posted by Nan