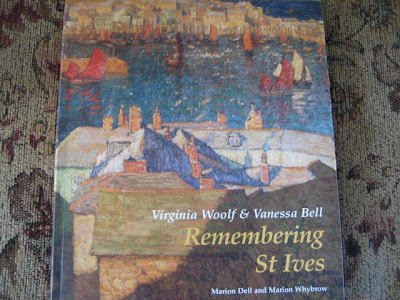 My January Celebrate The Author Challenge choice was an easy one. For the past few years now I've been reading books either by or about Virginia Woolf in January, her birthday month. I read about this book at Mary's Library a few months ago, and knew I must own it.

The concept is an interesting one. The authors set out to show how the artistic lives of sisters Virginia Woolf, a writer, and Vanessa Bell, a painter, were influenced by their summer years spent at St Ives, Cornwall. I felt the book to be basically a success. I did enjoy it. But as I neared the end, I began to feel that it wasn't quite the unified piece I would have liked. That could be simply because it was written by two women, who split up the writing. One wrote chapters on Julia Stephen (their mother) and Virginia, while the other wrote chapters on Leslie Stephen (their father) and Vanessa.

I prefer facts over conjecture. I read too many phrases such as these:

This is a small gripe, yet I found it jarring. Another problem I had with the book was keeping track of the many artists' names. Once in a while a name was mentioned as if I was supposed to know about him, but I didn't. And it sometimes felt as if there was too much information when the emphasis was supposed to be on the Stephen girls.

However, the wonders of the book abound: Virginia's writings as a child, the family photographs, the work of the artists who painted at St Ives, examples of Vanessa's paintings and excerpts from Virginia's books. And mostly, I was happy reading it because I am so fond of Virginia Woolf, the woman and the writer. I enjoyed reading about Vanessa, and I do own a biography of her waiting on the shelf, but mostly my interest in her is because she is Virginia's sister.

You may recall a book report on Recollections of Virginia Woolf in which I wrote:

She made her own bread, and taught the cook to do so. Can you imagine it? Virginia in the kitchen kneading bread. It makes me ache with affection for her.

Well, I felt that same ache often while in the pages of this book, mostly when I saw the old photographs, and read her ten year old words in her own handwriting.

In conclusion, even with my criticisms, I am so glad I read the book. It is one I will open often, particularly to look upon those pictures. Putting together the lives of Virginia and Vanessa in conjunction with their childhood years spent at St Ives broadened my knowledge of both women. There was a great contrast between their constricted London lives in a dark, gloomy house with the freedom and light of the Cornish coast. That freedom to run, to play outside, and to walk about the town which was an important artist colony had a profound influence on both girls in their chosen careers.
Posted by Nan