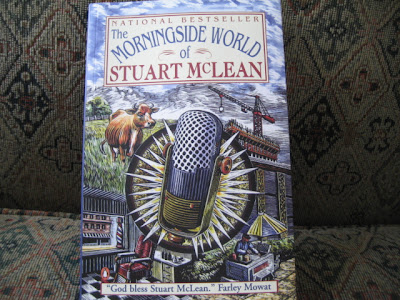 When I read the writings of Stuart McLean, I simply must share his words with anyone who is nearby. It feels like passing the peace; like spreading sunshine. And it is so much fun to amaze a listener with little known facts.

These essays were originally presented on CBC's Morningside show in the 1980s. Even when a modern writer does a great deal of research before writing about the past, the finished work never quite has the immediacy and the truth that a book has which was really written during that time. And so it is with these essays. They are very much of the nineteen eighties. I'm not talking about pop culture or music or movies, but simply the day to day life then. And I am happy to say that a couple of the concerns Stuart McLean had did not in fact happen, and did actually improve. Coincidentally, they both involve milk. In one he fears that the Jersey cow will disappear, and in the other he bemoans the demise of door-to-door milk delivery. Well, happily, the Jersey cow is thriving, and even in our little area, the dairy farm from which we buy our raw milk, has over the years shifted their herd from Holsteins to Jerseys. And in these days of low fat milk, there is still a market for the milk with cream that you can skim off the top. Perhaps the increase in cheese production has helped as well. And there are still some milkmen around.

He writes about subjects I have never even thought about and makes them interesting, such as Meccano, making flags, the history of yo-yos. He writes about common, everyday subjects like shoveling snow and delivering newspapers, and makes them not so commonplace. I learned about those fellows who walk around with metal detectors. I learned about a street vendor who sells hot dogs, and a woman, not too much older than my children, who lives on the streets. He is a master storyteller. His choice of words, his choice of topics allow the reader to step inside someone's life, and really understand and care about that person.

Now, this one really had me shaking my head in amazement. He does a piece on groundskeepers, the people who take care of baseball fields. He talks to the man who works for the Chicago White Sox. If you are like me, you thought the groundskeeper takes care of the field, period. Stuart McLean writes:

It has been said that playing baseball against a team with a good groundskeeper is like facing a team with an extra man in the field.

The man from the White Sox, Mr. Bossard, tells us he studies the statistics of both teams about to play.

He knows, from studying the books, that when his team faces a low-ball pitcher, about 53 percent of Chicago's hits will bounce within an eight-foot radius of home plate. So every time a a low-ball pitcher comes to town, Bossard makes sure the ground in front of home plate is hard and dry, so that those Chicago hits get a good bounce. On the other hand, if it happens to be the Chicago pitcher who specializes in the low ball, Bossard will go out before the game with a garden hose and water the living daylights out of that eight-foot circle, so that every time the opposition hits a grounder, it will bounce in the muck and be slowed down for the Chicago fielders.

It may seem like I've already given too much away, but there are many more surprises within the pages of this book. You will learn about the pencil, eating alligator, and making a life list. There are thirty essays and I loved every one. This would have been a wonderful book just for what I learned, but with Stuart McLean telling the stories, there is a dimension of humanity, of real compassion, and joie de vivre. It will make you feel happy to be alive, and mighty glad that he is in this world sharing tales with us.
Posted by Nan