Book Report/No Graves As Yet 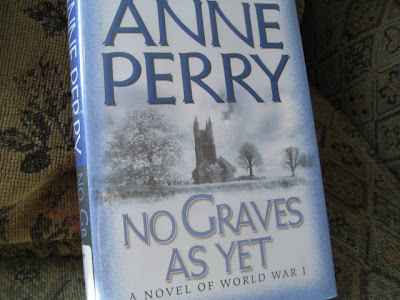 This book was not a challenge choice, but was recommended by Kay.

When I come across two particular words in a book, I know that I am in the England I so love reading about. Scrubbed and spilled.

In the kitchen they sat around the scrubbed table

Flaming nasturtiums spilled out of an old terra-cotta urn

I sigh with pleasure, and usually can be confident I am where I want to be. Add punting on the river in Cambridge, and descriptions of rooms and nature, and I'm pretty happy. Then add a touch of mystery, and especially a touch of a spy mystery, and if the writing is good, and the story well-told, I can't ask for more.

No Graves as Yet satisfies each of these most personal qualities.

A sense of place is very important to me in books as it is in life. I have a sort of heightened sensitivity to the "feel" of a house, a road, a town. It has always been there, even as a little girl. My remembrance of locales is strong. I have tried to read Anne Perry's Inspector Monk series, but I have come to the realization that I'm not comfortable in those dark and dreary (and often scary) Victorian streets. I am comfortable in this setting; this golden age of England, just before the eruption of the First World War.

As he passed through Grantchester, a dozen or more youths were still practicing cricket in the lengthening sun, to the cheers and occasional shouts of a handful of watchers. Girls in pinafore dresses dangled hats by their ribbons. Three miles further on, children were sailing wooden boats in the village duck pond. A hurdy-gurdy man cranked out music, and an ice cream seller was packing his barrow to go home, his wares gone, his purse heavy.

This reminds me of the poem by Rupert Brooke, called The Old Vicarage, Grantchester.

I only know that you may lie
Day long and watch the Cambridge sky,
And, flower-lulled in sleepy grass,
Hear the cool lapse of hours pass,
Until the centuries blend and blur
In Grantchester, in Grantchester. . . .

. . . oh! yet
Stands the Church clock at ten to three?
And is there honey still for tea?

The story begins on a perfect day at a cricket match. As Joseph Reavley watches, his brother Matthew arrives with the terrible news that their parents have died in a car accident. He also informs Joseph that the father was on his way to deliver a document to Matthew:

a document outlining a conspiracy so hideous it would change the world we know - that it would ruin England and everything we stand for. Forever.

On that same day, Archduke Ferdinand of Austria was assassinated. Could the deaths be related, or is this just a sad coincidence?

I really loved this book, and look forward to the others in the series, each of which covers a different year in the war, and follows the Reavley family. I can't wait to read them.

Marcia's book reviews are now featuring the dedications, and I think this is a great idea. I always read them with interest, as well as the little sayings or poems that often preface a book. For this book they are especially meaningful.

Anne Perry dedicated this to:

my grandfather, Captain Joseph Reavley, who served as chaplain in the trenches during the Great War.

The title of the book comes from G.K. Chesterton:

And they that rule in England,
In stately conclave met,
Alas, alas for England
They have no graves as yet.