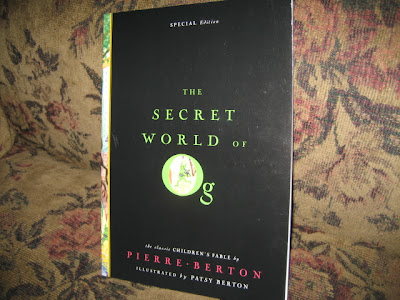 My fourth selection for The Canadian Book Challenge Eh? is The Secret World of Og by Pierre Berton. The book was recommended to me years ago by an internet friend from Nova Scotia. She had read it as a child, and simply adored it. This is a particularly sweet edition because the drawings are done by Patsy Berton, the author's daughter.

The book was published in 1961, and has that older times feel to it. The children really "play." They dress up, they pretend, they have adventures in the fields around their home, without their mother knowing exactly where they are at every minute. No computers or cell phones or video games. Television is a part of their lives, and favorite programs are mentioned, yet these shows are a jumping-off place for their games.

The children are beautifully presented. They are real, fully drawn individuals. I found it a great pleasure to be in their company. Berton clearly understands children, even those too young to speak yet.

On the afternoon that It happened, the Pollywog [the baby, Paul] was in jail as usual; and as usual, he was trying to escape. For his entire life, which seemed to him to have been very long but was actually only twelve months, he had been staring out at the world from behind bars.

First, there had been the crib in the hospital, into which they popped him after he was born, and then there was the crib at home. Sometimes they would take him out of the crib, and pop him in the playpen; more bars. The Pollywog would grip the bars, like a convict, and stare out at the world. He would work out elaborate means of escape and sometimes he actually succeeded in escaping. Nobody ever knew how he did it, but the fact was that occasionally he would be discovered outside his playpen or crib or down off the high chair, which was his third prison.

This ability becomes useful when the children have their adventure, just as the special qualities of all the others stand them in good stead. Berton does a great job in presenting each child's strengths, even character traits that might not be considered so. He can see the whole child, and how, for example, falling into the water twice a day is part and parcel of Patsy's personality. Yes, Patsy, the illustrator. All the children have the Berton children's names: Penny, Pamela, Patsy, Peter, Paul.

The adventure begins when they leave the baby alone for just a minute while they go out and come back into the Playhouse, as if attending a fancy tea. He disappears, and Pamela admits that earlier she saw a little green man with a hand saw cutting out a hole in the floor. She hadn't told anyone because no one ever believed her sightings of such creatures. Well, now she is believed, and off they go after the Pollywog. They come upon an underground community of green Ogs, whose toys and money and comic books bear a surprising similarity to those "lost" by the children over the years.

I just felt such delight reading the book, and only wished I had known about it when my kids were little. As in all the best children's books, the children are bolstered, they learn lessons (though not in a heavy-handed way), and they become more self-reliant. Though not seen much, the parents are mentioned enough that the reader knows the children are deeply loved and cared for. The book says for ages 5-9, and that seems just about right; a perfect read-aloud for the young ones, and a fun beginning reader for the older ones.
Posted by Nan