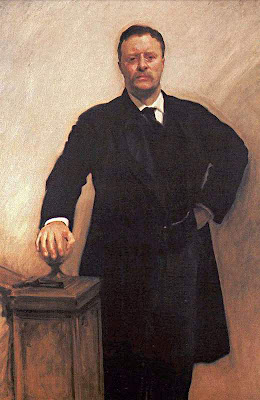 We had a delightful Christmas yesterday—just such a Christmas thirty or forty years ago we used to have under Father's and Mother's supervision in 20th street and 57th street. At seven all the children came in to open the big, bulgy stockings in our bed; Kermit's terrier, Allan, a most friendly little dog, adding to the children's delight by occupying the middle of the bed. From Alice to Quentin, each child was absorbed in his or her stocking, and Edith certainly managed to get the most wonderful stocking toys. Bob was in looking on, and Aunt Emily, of course. Then, after breakfast, we all formed up and went into the library, where bigger toys were on separate tables for the children. I wonder whether there ever can come in life a thrill of greater exaltation and rapture than that which comes to one between the ages of say six and fourteen, when the library door is thrown open and you walk in to see all the gifts, like a materialized fairy land, arrayed on your special table?

President Theodore Roosevelt in a letter to his sister, Mrs. Douglas Robinson
Posted by Nan