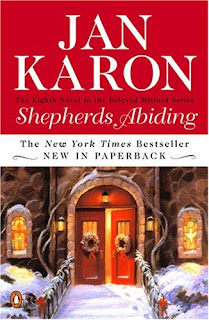 Listening to Shepherds Abiding by Jan Karon has been an excellent way to end my 2007 reading year. First of all because it is a Christmas story par excellence, and second because it is nice for me to spend the last days of the year in Mitford, the town in North Carolina where Karon sets this series of books. Those of us who grew up in a similar small town will recognize the people with their kindnesses, their faults, their eccentricities. I haven't been pleased in later years to see that her books are now categorized as "Christian fiction." Just as I don't like pigeonholing people, I don't like classifying books. I'm sure there are many people out there who won't read these lovely books because of this; people who think they might be "preachy" or moralistic. Well, they aren't. They are about regular people going about their lives, doing their best, failing, and starting again. Yes, the main character is an Episcopal priest, and he is guided by his faith, but this is never written in a heavy-handed way. Just as one doesn't have to live in England to enjoy an English book, one doesn't need to be an Episcopalian or even a Christian to love these books.

I've read only one of this series in the print version. All the others have been read to me by the most excellent John McDonough. What a great voice he has. He brings each character to life, and he even sings.

The main story in this eighth tale in the Mitford Years series is about Father Tim finding an old nativity scene and feeling moved to fix it up and give it to his wife for Christmas. He has always been a "man of the mind" and he finds a new creativity in himself. As in all the books, this is just one part. We also revisit our old friends like Uncle Billy who is trying to come up with a "Santy" present for his wife of many years, who has mental problems. We see Lew Boyd, the gas station owner coping with the fact that his new wife must live in another state. Mitford is not like Lake Wobegon, "the little town that time forgot." It is a living, breathing town whose inhabitants live their lives, not apart from the world, but in it. Some of the businesses in town are facing change; the owners of the Main Street Grill are retiring, and Hope Winchester wants to take over ownership of the local bookstore, called Happy Endings. In this series, people grow up, they grow old, they marry, they die. The books are not "sappy" or sentimental. I find them inspirational, and not just in a religious way. I am inspired to work toward being a better person, to think more of others, to live more fully. They also give hope to those who are facing older years. The people in this book continue to grow and learn even as they age.

Along with the book, this recording contains two short stories, Esther's Gift and The Mitford Snowmen, both of which are warm and entertaining and give the reader further insight into the people of Mitford.

Jan Karon ended the Mitford series, and has now begun a new one which brings us back to Father Tim's childhood. The first is called Home to Holly Springs.
Posted by Nan