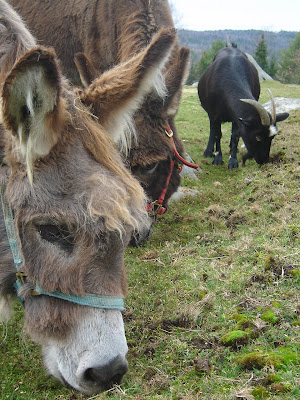 The kind, dependable donkey is featured both at the beginning and end of Jesus' life, and legend has it that the cross on the Sicilian donkey's back comes from this association.

We have had miniature or Sicilian donkeys since 1988. We got them primarily to guard our sheep. We had heard of a local donkey who chased a dog out of the pasture, and that they would be a great protection against coyotes. And in all these years, even with the coyotes around, we've never lost a sheep. If a moose walked through the pasture, the sheep and goats would group around our late horse and the donkeys until the presumed danger was gone. But I think we would have gotten them anyway because we fell in love with Derek and Jeannie Tangye's donkeys in his books.

Well, a few weeks ago our donkey, named Juno, died. He was thirty years old. This is where the expression donkey's years comes from; they live a long time, but it is still very sad when death finally comes. Both the vet and the farrier had told us the time was near, but he lasted longer than they thought. He was thin and he limped, but he kept eating and he actively wandered the pastures with all the others. Tom thinks it was a heart attack. Juno had eagerly eaten grain and hay the night before, and his death looked like it had been quick and peaceful. After the initial shock, our thoughts turned to Daisy, his slightly younger companion; how would she react? They were very close, always near each other when in the pasture. Tom felt he should leave Juno in his stall for a while to give Daisy time to adjust to his death. She was curious and would stick her nose over the stall door and smell. Tom let her into the stall two or three times until she didn't seem interested anymore. A friend of ours who has a backhoe came over to dig the hole; there was little snow and the ground wasn't frozen yet. It took half an hour from beginning to end to bury him. Both our kids have never known life without Juno. He was a gentle soul, and we will miss him.