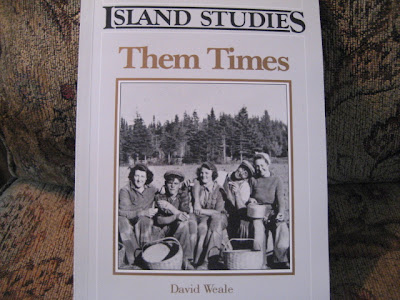 This is a collection of stories from the older people on Prince Edward Island, Canada along with the author's own thoughts and remembrances of life in "them times," the years before the Second World War. I approached the book expecting fine and interesting stories, but I did not expect such excellence in writing. There are a lot of people out there writing books or newspaper articles celebrating or bemoaning the old days. In my experience most of these are not well-written. They begin with some sort of theme which they lose along the way, or they tell a story that has no meaning beyond the writer's ideas. David Weale is a wonderful writer and storyteller.

Among the phrases I love:

the confidential back stairs; I know exactly what he means for I have a set. The front stairs are visible all the way to the top and they are what you see as soon as you come in the front door. But those kitchen "back stairs" are off the kitchen wall and you see only the first couple before they wind off to who knows where.

It was like growing up in a straitjacket of community surveillance; the reader who has grown up in a small area knows exactly what this means. Everyone knows you, your routines, your family, your past. And though he also talks about how this can be wonderful, his apt description tells the other view.

Then he offers this beautifully expressed paragraph in a chapter called Spring Cleaning:

In those polished hardwood days, where the circumstances of a woman's life were so largely preordained, and where there was so little opportunity for replacing or even rearranging the old furniture of disappointment and regret, the ritual of spring cleaning was an important symbolic undertaking. It wasn't just the year's accumulation of dust and dirt that had to be dealt with, it was also the winter's accumulation of drudgery, repetition, and constraint that needed scouring and ventilating. That was the real grime.

In an essay called Homemade Bread:

No surpliced priest at his altar ever performed a more sacred task than that aproned woman at her kitchen table, for it was the staff of life in her hands, and in her hands the answer to the prayer, "Give us this day our daily bread."

These stories have truth and significance for all of us, not just those people who live on PEI. "Them times" were lived in New England and Garrison Keillor's Minnesota. Rick Bragg writes about them in All Over but the Shoutin', and he grew up in Alabama. They offer a universality that we can all recognize. David Weale writes very fairly and honestly about all facets of this rural island life of not-so-very-long ago. He touches on telephone party lines, and love for the land, and the cold houses in winter. He doesn't say these were the "good old days," but finds both the wonderful and and the difficult in the lives of the people.

One of the worst criticisms that could be bestowed on someone was that he was "big feelin'" and I can well recall as a child we would say that a former friend thought she was "big," that is, better than anyone else. When Weale writes, "in this province we often seem more comfortable with failure than success. We know how to handle it better," it could be the folks of Lake Wobegon we've heard so much about on A Prairie Home Companion.

He writes of the days when Roman Catholics and Protestants could not marry. It wasn't done. I can't believe I am old enough now to remember those times. They were beginning to fade but there was still much intolerance and whispering about what went on in one another's churches.

Weale tells about the big families back then, when four or five kids was considered a small family, and if "there were only two or three, everyone wondered why, and the priest might make it his business to find out."

Eldest daughters in these large families were frequently called upon to assume a heavy weight of responsibility. Some of them would be making meals, baking bread, and caring for infants.

This was my Aunt Mabel, the third born and the first girl, with seven younger than her. She spoke often of how she practically raised her younger siblings. Not surprisingly she never married and had children. She lived a nice quiet life, working in the Post Office until retirement age. Both my parents came from these large families, and hardly any of the children had more than one or two children.

Although we took trips to various locations when the kids were little, Prince Edward Island in Canada was the only place we visited for three years in a row. We rented houses in three different areas for a week. We visited the beloved Anne of Green Gables house, of course, but we also went to Ceilidhs in a little church in the middle of nowhere and were served strawberries and ice cream after the music and dancing. One year we went to the Irish Hall to another Ceilidh and saw old men get up and dance as they must have done for ages. It may not be just as it was, but it was a place of enchantment for this family in the twentieth century.

I loved this book, the third I've read for the Canadian Book Challenge, and literally couldn't put it down. I stopped whatever I was doing to read a bit. Because each chapter is a short essay, it is easy to pick up anytime.

And did you hear about the author last year? He caused quite a stir.
Posted by Nan