Women at home and food and rhubarb

This morning, my childhood neighbor died. She was one of the uncommon now, but common then, women who was at home. She didn't put "at home" on forms, but called herself a "housewife"; just as my mother did, and all my friends' mothers did. Now the term is often used in a disparaging way. Married to a house is the implication. But those of us who are "at home" these days, must admit there is truth in that phrase. Some people (men in the old days) are said to be married to their jobs. Our job is the house; that is the house and its inhabitants.

This neighbor and my mom and all the other moms were there. They pretty much just left the house to go "downtown" or "overstreet" to shop. The milkman and the drycleaner man and the mailman all came to them. I can't count the hours I have sat in the kitchen with this woman and other women. And those hours helped make me who I am. They showed me that I mattered, that I was interesting or fun to be with, and that time was for spending together and that "just" talking was of immeasurable worth. I never knew a woman who seemed unfulfilled. They did their work and the fathers did their work. As I look back, I think they all had a lot of fun. They could take coffee breaks and visiting breaks and telephone breaks in the midst of their working days. They got exercise simply in their everyday activities.

When I am sad, I often go into the kitchen and bake. There is something about measuring out ingredients, mixing them together, and putting them in the oven which soothes my very soul. It is the greatest comfort to me. Today I made the Sennebec Pudding and I baked bread. I went over to the counter almost as soon as I got off the phone with my friend, whose mother had died.

And then there is the rhubarb. It was at my neighbor's house where I first ate rhubarb. I don't recall it being baked into anything like I make, other than maybe a sugar syrup poured over it. Mostly we chewed it raw. I loved that bitter taste. This afternoon I went out and picked a lot of rhubarb to freeze and only when I finished did I think about this connection. 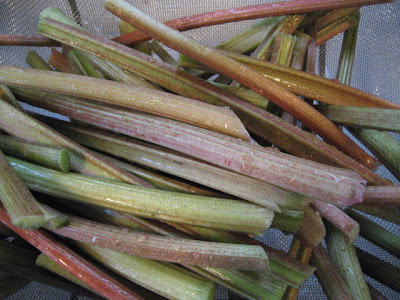