A summer evening at the movies

What a wonder it was last evening coming out of the movies to 80º temps and bright skies. O marvelous summertime! 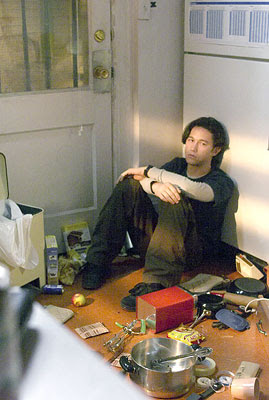 The movie at our little theatre was The Lookout. I'm not giving anything away because right at the start, there is a teenage car crash. The driver survives, and we see him four years later with brain problems. He has to write down everything to do; get up, take a shower, eat breakfast. He lives with an older blind man, and together they have a life. Both have a lack, but they are surviving, and they have dreams. The brain-injured man works as a janitor at a bank and has aspirations of becoming a teller. The blind man wants to start a breakfast and lunch restaurant in an old garage. Life changes dramatically and as we find out soon, drastically, when the young man meets up with a guy who tells him he can have a different kind of future. "Whoever has the money, has the power." The movie stars Joseph Gordon-Levitt, Jeff Daniels, and Matthew Goode. We totally believe in these characters and the lives they lead. The landscape and the season of the year are as much characters as the people in the movie, with gray skies, long straight roads, and flat fields. Though set in Kansas, the movie was actually filmed in Manitoba, Canada. We saw it with a friend and all three of us thought it was a very good film. The picture shows him after a tantrum he has in his kitchen when he can't remember how to open a can. This is one of the many frustrations he faces just getting through the day. I am fascinated with how the brain works, in books like A Three Dog Life and movies like Memento.
Posted by Nan