After hearing this in my current audiobook, No Ordinary Time by Doris Kearns Goodwin, I was as amazed as I've ever been. Can you believe it? I am speechless.


In the summer of 1942, the accustomed rhythms of daily life were disrupted in every factory, business, and home by the institution of rationing and price control.

To ensure a sufficient amount of cotton and wool to supply the army with more than 64 million flannel shirts, 165 million coats, and 229 million pairs of trousers, the War Production Board mandated a new "Victory" suit for civilians, with cuffless trousers and narrower lapels. Reductions in the amount of cloth allowed also led to shorter, pleatless skirts, rising several inches above the knee, and to the creation of a new two-piece bathing suit.

Women took the loss of pleated skirts and one-piece bathing suits in stride, but when the rubber shortage threatened the continuing manufacture of girdles, a passionate outcry arose. Though government sources tried to suggest that "women grow their own muscular girdles by exercising," women argued that "neither exercise nor any other known remedy" could restore aging muscles to their original youthful tautness. Without "proper support from well-fitted foundation garments" to hold the abdomen in place, there was no way, journalist Marion Dixon argued in a contemporary health magazine, that a woman past thirty could keep her posture erect or do physical work without tiring. "Certainly," Dixon concluded, "Uncle Sam does not want American women to wear garments that would menace their health or hamper their efficiency, especially during wartime, when every ounce of energy and effort is needed."

The government heeded the women's cries. Not long after the first public discussion of curtailing girdles, the War Production Board announced that foundation garments were an essential part of a woman's wardrobe, and as such could continue to be manufactured, despite the precious rubber involved! 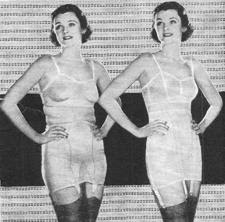