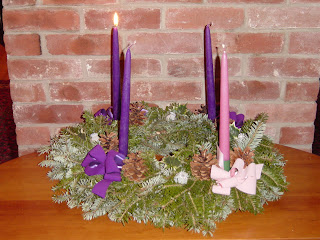 Tonight, this first Sunday of Advent, I lit a candle on the Advent wreath. It was made by a local florist, and I think it is so beautiful. I believe this is only the second time we've had an Advent wreath. The first one we made with the kids when they were little. The following information I got online from fact monster.

Advent is the period preceding the Christmas season. It begins on the Sunday nearest November 30, the feast day of St. Andrew the Apostle, and covers four Sundays. Because the day it begins changes from year to year, so does the length of each Advent season. In 2006, Advent begins on December 3.

The word advent, from Latin, means “the coming.” For centuries, Advent has been a time of spiritual reflection as well as cheer and anticipation. Even as the Christmas season has become more secular-with advertisers urging holiday gift-givers to buy and buy some more-Advent still brings joy and the observance of ancient customs. Christian families find quiet moments lighting candles in the Advent wreath, and children use Advent calendars to count the days until Christmas.

Advent wreaths have their origins in the folk traditions of northern Europe, where in the deep of winter people lit candles on wheel-shaped bundles of evergreen. Both the evergreen and the circular shape symbolized ongoing life. The candlelight gave comfort at this darkest time of the year as people looked forward to the longer days of spring. Later, Eastern European Christians adopted this practice. By the sixteenth century, they were making Advent wreaths much as we know them today. An advent wreath traditionally contains four candles-three purple and one rose. Purple dyes were one so rare and costly that they were associated with royalty; the Roman Catholic Church has long used this color around Christmas and Easter to honor Jesus. The three purple candles in the Advent wreath symbolize hope, peace, and love. These candles are lit on the first, second, and fourth Sundays of Advent. The rose candle, which symbolizes joy, is usually lit on the third Sunday.

Sometimes a fifth candle is placed inside the Advent wreath. This candle is lit on Christmas Day. It is white, the color associated with angels and the birth of Jesus.

Because Advent wreaths are an informal celebration, not all are the same. Instead of purple candles, some people use blue, which recalls the color of the night sky before daylight returns. Others use all white candles.
Posted by Nan