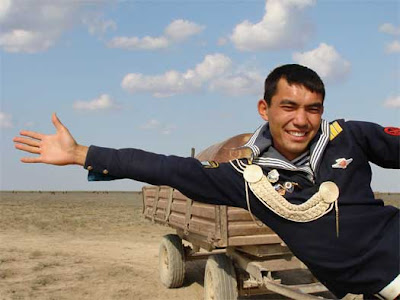 Tulpan is the name of an unattainable girl we never see. The film begins with Asa, a young man fresh out of the naval service, meeting with her parents, hoping to convince them of his merit. He tells them amazing stories of the ocean while the girl peeks in through a curtained doorway. She is not impressed. She thinks his ears are too big. They do stick out somewhat but are not overly huge. He takes to wearing a cloth strap around his head trying to flatten them. After a couple visits, the parents make it very clear to him that she does not want to marry him. Still he perseveres; talking to her through a door when he thinks she is in a shed. (She isn't - but there is a sweet listening goat).

a circular tent of felt or skins on a collapsible framework, used by nomads in Mongolia, Siberia, and Turkey.

on a Kazakhstan steppe.

a republic in central Asia, south of Russia, that extends east from the Caspian Sea to the Altai Mountains and China; population 15,143,000; capital, Astana; languages, Kazakh (official) and Russian. The Turkic tribes of Kazakhstan were overrun by the Mongols in the 13th century, and the region was eventually absorbed into the Russian empire. Kazakhstan formed a constituent republic of the Soviet Union and became an independent republic within the Commonwealth of Independent States in 1991.

They are nomads who pick up their house and leave when the time comes. 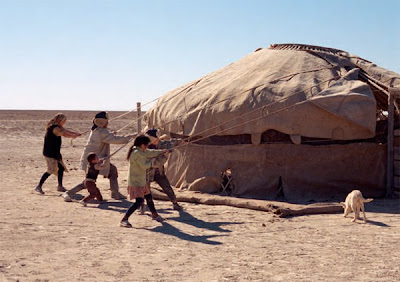 The children in the family are each very much individuals. The only girl sings and sings and sings. The older boy listens to the radio news and repeats it verbatim to his father. The little boy, maybe three years old, rides his wooden horse around and around, getting into little boy trouble while being utterly adorable. The life is very earthy and naturalistic. The father works hard as a shepherd, battling strong winds which stir up incredible dust and dealing with the troubles that come with such a job. Lately lambs have been dying, and he is told it is because the mothers are starving. We see there are only tufts of grass on the steppe - no real forage to speak of.

Asa loves this life deeply. In fact, the movie viewer is pretty sure the only reason he really wants to marry is because a man who does such work must have a helpmate to do the cooking and to keep the home.

Oh my goodness I loved this movie. Everything in it was a revelation to me: the life, the locale, the camels, the language. I felt like I was being allowed into the life of these people. It is not a documentary but felt like it in some places. This is natural because the director, Sergei Dvortsevoy, makes documentaries. There is an amazing sequence of a lamb being born. This is a huge event in the movie because of the way lambs have been dying. It is so important that there be new life in the flock. Yet, the movie is also very enjoyable as just a regular movie about people. There is a humorous character, a friend of Asa's, who is wild about modern life (and women) and wants to move to the city. We see the difficult yet very close-knit life of the family. Their home is one big room where all facets of life occur. This is a truly wonderful movie. You may watch a trailer, and learn more about the movie here. It comes out on dvd in September.
Posted by Nan