Tea Time for the Traditionally Built by Alexander McCall Smith 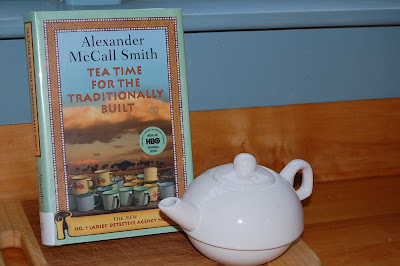 
You will either think I am nuts, or you will nod your head in understanding: I feel as if Mma Ramotswe and the others in Alexander McCall Smith's No. 1 Ladies' Detective Agency books are real people. Or at least, I want them to be real. Or, at the very least, there is this wonderful author in the world who makes me believe in these characters. The ten books in the series are like chapters in their lives. Often a book will feature one of the cast of characters more prominently, giving us a glimpse into each one.

In case you haven't read any of the books, the premise is that Mma Precious Ramotswe started a detective agency. The books feature a case, or cases, but they are not really mysteries. They are full of thought and feeling. They are not action-packed, but slow and quiet observances of life in Botswana. The fact of AIDS is touched upon, but not focused on. I read the following online:

The Republic of Botswana is in southern Africa, north of South Africa and to the west of Zimbabwe, with Namibia on its eastern border. Since independence in 1966 there have been many impressive social and economic improvements. Ninety-seven per cent of the 1.5 million population have access to safe water, and with free primary education access to learning is high with over 84 per cent of children enrolled. However, the highest HIV/AIDS infection rate in the world is creating enormous problems. Close to 22 per cent of the population is HIV positive and life expectancy has dropped from 65 to 38 years. The number of orphans under the age of 15, because of AIDS, is estimated to be nearly 80,000.

These statistics are shocking and unimaginable. This is the reality of Botswana, yet Alexander McCall Smith focuses on the human stories. I don't believe there have been characters with the disease, but mention is made about the changes in the country, and the orphan population.

Mma Ramotswe liked people to know one another, and if the bond between them went back over more than one generation, then all the better. That was how it had always been in Botswana, where the links between people, those profound connections of blood and lineage, spread criss-cross over the human landscape, binding one to another in reliance, trust, and sheer familiarity. At one time there had been no strangers in Botswana; everybody fitted in somehow, even if tenuously and on the margins. Now there were strangers, and the bonds had been weakened by drift to the towns and by other things too: by the conduct that had sired the wave of children who had no idea who their father, or their father's people might be; by the cruel ravages of the disease that made orphans in a country where the very concept of an orphan had been barely known, as there had always been aunts and grandmothers aplenty to fill the breach. Yes, all this had changed, but in spite of it, the old bonds survived.

I can't praise these books enough, and will do as I did with Jane's Parlour, and share quotes to give you a sense of the warmth, humanity, and gentle humor of the book.

She looked at the woman, who smiled back at her; there was much that could be said without speaking, especially amongst women. A glance, a movement of the head, a slight shift in pose - all of these could convey a message as eloquently, as volubly, as words might do.

Until you hear the whole story, until you dig deeper, and listen, she thought, you know only a tiny part of the goodness of the human heart.

She would buy a doughnut for herself - a rich, greasy, sugar-dusted doughnut - and one for Mma Ramotswe too. They would eat them together over their morning tea, in companionable enjoyment - two ladies sharing a common office, but two friends as well, united as friends so often are, in the love of the things they loved.

The hot months were not easy - they drained the country of its energy, its vitality, crushing animals, people, plants under a sky that at times seemed like one great oven. And then, as the whole land became drier and drier and, in bad years, the cattle began to die, nature would relent, would remember that it was the time for rain. Great rain clouds, purple bank stacked upon purple bank, would appear above the horizon and then sweep in over the land with their longed-for gift of water. The temperatures would drop as the land breathed again; brown would become green; and the hearts of everything living would be filled with relief and gratitude.

"I'll try to be back in time for my dinner," said Mr. J.L.B. Matekoni. "But you know how it is."
Mma Ramotswe did know. He would not be back until ten that night, perhaps even later, and she would worry about him until she saw the lights of his truck at the front gate. That journey could be perilous at night, what with bad drivers and with animals straying onto the road. She knew of so many people who had collided with cattle at night; one moment the road was clear and then, with very little or no warning at all, a cow or a donkey would nonchalantly wander out in front of the car. But you could worry too much about these things, thought Mma Ramotswe, and she knew that worrying about things was no help at all. Of course you were concerned for those you loved; it would be impossible not to be so.
Posted by Nan