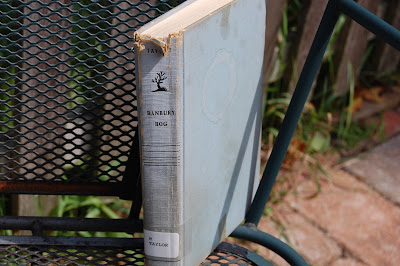 To some this wouldn't be a very attractive book, but to me it is beautiful. The binding is torn, there's old tape on the cover, and a round stain on the front. I wonder about the person who (accidentally?) put a glass or cup down on the book. Was it coffee, iced tea, something stronger? Anyhow, the book has a history, and well it should, having been published 71 years ago! And it thrilled me to see that it was taken out once last year, twice in 2006, and once in 2000. That may not seem like very often but for an old book without a lovely cover, tucked away in the back room mystery section, I find it remarkable.

I believe this is the third Taylor book I've read which features Asey Mayo, a local man who has sailed around the world. In this book, a descendent of an old Cape Cod family comes back to town, renovates the old family home, and goes on to make improvements in the town. Weesit has fallen on tough times, with not enough tourists to keep it a thriving town, and Mr. Phineas Banbury wants to make it prosperous again. But someone doesn't like the work he is doing. Some tarts he makes for a town supper are filled with arsenic, a selectman turns up dead, and both crimes are pinned on Banbury. It is up to Asey to find the real villain.

"I've been wondering," said Mrs. Banbury, "if it could be the sort of thing that seems to happen so often in politics. You know, at first everyone always says how perfectly splendid the new governor or the new president is, and everything he does is so fine. And then there seems to come a day when everyone starts calling him The Madman in the Capitol."

The book was an interesting mystery with many twists and turns. There was a lot of humor and snappy conversation, especially from the young Banbury daughter. In addition to the mysterious elements, there is really good writing about the Cape and particularly its fogs. The book begins:

The minute she sniffed it, Tabitha groaned. Like other weather-wise Cape Codders, she knew that this fog meant trouble. This fog was going to cause grief.

This was not the slinking, sinister fog that invariably left a drizzling rain in its wake, nor was it the type which East Weesit, borrowing a phrase from carpet-cleaning of another generation, referred to as a Tea Leaf. A Tea Leaf was the regular June fog that slipped in evenings when the sun went down, and slipped out the next morning at sunrise, leaving behind a salty tang in the air, and a fresher, cleaner shade of blue in the sky.

This fog, billowing in so boldly, blotting East Weesit off the map, was the variety Tabitha had learned, during her fifty years, to detest. This was a Stayer. ... Almost anything could happen during a Stayer, and it usually did.

Tomorrow that east door, along with every drawer, cupboard and window in her house, would be stuck tighter than a drum. Matches would refuse to light. Spots of mildew would break out on the linens. Sheets would be clammy. Beds would be damp. Even clothes hung carefully away in closets would begin to look crinkly and shapeless. Sooner or later, the dampness would do something to the electricity, and then the plumbing and the water pump would stop.

What a description! Not something I would feel happy experiencing. This fog has an effect on the story as you may imagine, as do the tides, and the changes which have come to the town, such as the trains ceasing operation to Weesit. Banbury Bog was a fun book to read, and I plan to continue with the series. More about the author here.
Posted by Nan