Book Report/The Skeleton in the Grass 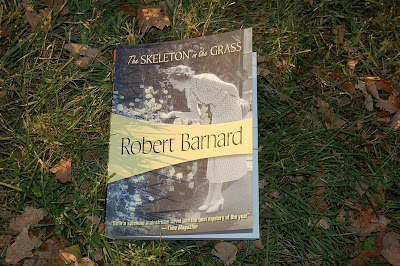 Although I enjoy and love a lot of books, it isn't often that every single page of a book satisfies in the way The Skeleton in the Grass did. The pleasure began with the wonderful old photograph on the cover.

The book is set in late 1930s England. The country is on the brink of war, but not everyone knows or believes it yet. A young woman accepts a job as governess to a six-year old girl. She comes from a bleak home in a vicarage, and finds the new family, the Hallams, to be full of sunshine [perhaps the yellow in the cover?] and life. They are intelligent, cheerful, deeply committed pacifists. The village has an Oswald Mosley character who is training the village lads in the ways of warfare, thinking forward to the war he feels certain will happen, not against Hitler, who is one of his heroes, but against Stalin.

Acts of maliciousness begin against the Hallams; a white feather, signifying cowardice, comes in the mail and there are killings of a dog and a chicken [thank goodness not dwelled upon for long]. One evening when they are all out at a neighbor's party, a young man is found dead on their property, next to a skeleton. There are a number of ways he could have died, as well as several people who could be responsible. This is the "mystery" in the book, but as in the very best mysteries, there is so much more to The Skeleton in the Grass. The reader learns about the decline of the "gentry," the clannishness of the villagers, the truth hidden just below the surface.

Along with books which feature time travel, I also greatly enjoy stories that go forward in time, and then come back again to the main year in which the book takes place. I read "many years later" or "decades later" and I knew the delight which comes from learning that certain characters make it through, and even what becomes of them. This is yet one more facet that made this book so wonderful.

To continue what I am calling the "Guernsey effect," literary references abound in The Skeleton in the Grass. South Riding by Winifred Holtby, Angel Pavement by J. B. Priestly, three books by Charles Dickens, The ABC Murders by Agatha Christie; a mention of an Ibsen character, and the noting of authors, John Buchan, Dornford Yates, Virginia Woolf, and D.H. Lawrence. Some I am familiar with but others are brand new writers and books to discover.

This edition of The Skeleton in the Grass is from Felony & Mayhem, a great new press that is publishing out-of-print mysteries. We readers are living in a grand time right now, when so many publishers are bringing back the old books we haven't been able to find.
Posted by Nan