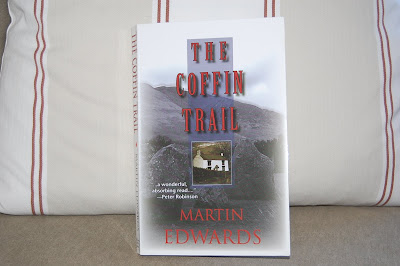 In older days, when there was no local church, a dead person was put on a packhorse, and led to the closest church on what is called a "coffin trail" or "corpse road." If you look closely at the beautifully designed cover of this book, you'll see a coffin, a cottage within it, and the mountains of the Lake District. Each figures prominently in this wonderful mystery. The cottage has just been bought, quite on impulse, by a new couple. They each want to get away from their present lives, and look forward to what they think will be a quiet, relaxing country life. Well, we know that won't happen, don't we? The cottage they've bought is known to the man, Daniel Kind, from a childhood holiday spent in the area. The boy who used to live in the cottage has been widely accepted as the murderer of a young woman several years ago, though he died soon afterward and was never tried in a courtroom. Daniel knew him briefly, and liked him. The boy, Barrie, was autistic - not known of in those days - and was thought crazy.

So, this is one story; a youngish couple beginning a new life together. A second story is that there is a new team in the area, formed of present and former police to work on cold cases, murder cases which were never solved. The case of Barrie and the murdered girl is one of them. Daniel's late father, Ben, was the police officer on the original case, and the lead officer on the cold cases used to work with him. The way these situations overlap, and connect further with all the other villagers, past and present forms the basis for an intriguing, surprising book. As you know, I was gripped by the story, and couldn't sleep after reading it just before bed one night. There is great detail about people and about the natural world. There is the tension between old-time residents, and people new to the area. We see the extraordinary beauty of the place, and its isolation. The book is in the mystery genre, yet it is also a great character study, as the best mysteries are. I completely enjoyed my time within the book, and thoroughly recommend it. I'm thrilled there are more in the series, and I can't wait to get back to this area and its people.

A moment in the book which I found refreshing and all too unusual in the world of detectives, was the account of the woman police officer:

Her face had a few freckles and was faintly tanned by wind and sun. [not a tanning place!] She wore no make-up or jewelry and didn't have a single ring on her long fingers. He couldn't detect a perfume. He guessed her attitude was take me as you find me. When they shook hands, her grip was firm.

Very often police women, particularly on television or in movies, wear revealing clothes and high heels, and have salon hair which is always falling in their faces as they run after a criminal. Hannah Scarlett in The Coffin Trail is a real police officer, one concerned with her job, not her appearance.

One of my favorite lines comes from Daniel's description of himself:

Seldom happier than when I'm on my own, lost in a book.

I wonder if the author might describe himself this way.

It cheers me that even with the world getting smaller, there are still differences between British English and United States English. And though many words and phrases have become common to each, there are still some that haven't traveled "across the pond." The Coffin Trail offers many examples which I jotted down as I read the book.

And then there are all the words and usages that are different. Though over here, we now use "pub" as often as "bar," we still don't offer pub meals. I often read the word, cardigan for sweater in British books. And while we do call a button-up sweater, a cardigan, I rarely hear anyone say she is putting on her cardigan; we would just say, sweater for both pull-overs and cardigans. I love the British usage of "lads." We just don't use it over here. And I love the British spelling for the informal word for mother; mum. In the US, it is mom, whether pronounced "mum" or "mom" (as in Somerset Maugham). I like the British expression, "she keeps herself to herself." I love the money words in Britain - bob and quid. And I'm fond of stone as a measure of weight - 14 pounds to us. The most puzzling to me is the "bank manager" whom people in books are always concerned about. Becky Bloomwood in the Shopaholic books is perhaps the most famous character with bank manager problems, but I read about them and wonder. Are they like accountants who help people with their money; telling them what they should and shouldn't spend? I must admit, I'm not familiar with accountants either, so I'm rather guessing what they do.

I hope this won't be confusing because I have another giveaway going, but each person who comments on this post only, who would like to read this first in Martin Edwards' Lake District series, will be entered in a drawing to win my copy of the book. I'll send it anywhere, so don't be afraid to leave your name if you live across any of the oceans. I'll do the drawing on Sunday, November 30.
Posted by Nan