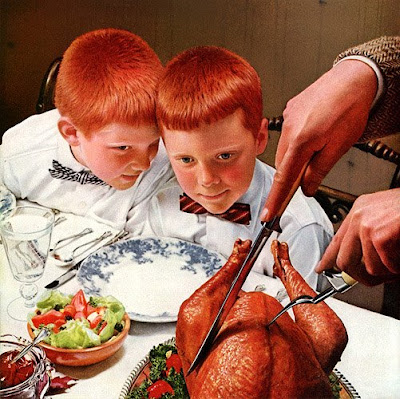 Charles Dickens didn't write about a Thanksgiving scrooge; only a Christmas one. Well, I am going to write about the former, since indeed, I may be one. I suppose the obvious reason is that I'm a vegetarian, and this day above all others glorifies a dead creature. Over the years, I've read horrible tales of what has happened to the domestic turkey to make it more palatable as the Thanksgiving bird. I won't go into that. But I will go on a bit about gluttony, and how the holiday simply glorifies overeating. The stories of people feeling "stuffed" - oh, a pun here! - and yet eating more; people getting up from their chairs a while later and heading to the kitchen for more pie or a turkey sandwich. I just don't understand it. It doesn't jibe with my feelings about gratitude. Oh, and grace. I don't have any statistics, but my strong sense is that in most families, it isn't said at any other meal during the year. I'm not being critical; we don't say grace. I didn't grow up with it except on that day in November. But somehow it just feels wrong. Thank you, God, for all this food I'm going to overeat. Think, if we all got up from our meal, and brought food from our table to someone with no food. I know there are Thanksgiving drives, and food pantries, but there are still a lot, a lot of folks with nothing. Maybe a can of beans for that holiday. And even when we give offerings, we still eat and eat and eat.

One of my favorite expressions is "the elephant in the room." Here's how a dictionary describes it:

a major problem or controversial issue that is obviously present but avoided as a subject for discussion because it is more comfortable to do so.

Well, I think that elephant is the unpleasantness which oh, so often occurs around the Thanksgiving table. The movie, Home For The Holidays (which I meant to write about last year, and hope to do so this month) is one of the few books, movies, or real people who actually face this situation straight on. It is done in a warm, often humorous way, but still there is the undercurrent that I am talking about here. Often, this is the time family comes from all over. People who don't see each other that often. People who are usually relatives; and not necessarily beloved relatives. More often, someone (or many someones) has too much to drink, and the tongue is freed to say things better left unsaid. Old animosities, old insecurities, old roles come to the forefront again. Adults who go along with their lives just fine, thank you, the other eleven months of the year, are sometimes reduced to sniveling, whining ten year olds again in the face of parental criticism. "Do you really think that dress suits you?" "You voted for THAT man?!" "What do you mean you are a vegetarian??!" Brothers and sisters who managed to get along without killing each other throughout their childhoods are suddenly faced with all those annoying traits that drive each other crazy. One is for a war, and the other marches against it. One is a verbal racist, and the other abhors racism.

In the movie, there's a line spoken by one sister to another on the great day: "If I met you on the street and you gave me your number, I'd throw it away." And the other says, "We don't have to like each other; we're family." And therein probably lies the greatest truth of all.

If you have read my blog for a while, you probably know that I am quite cheerful, optimistic, sentimental, and idealistic. But I am also a non-cynical realist. I think this particular holiday is more wrought with emotion than any other, and more than most people admit. It's okay. People get through it. But for me, I'm thankful every single day, and don't really need a calendar date to tell me to be so. Our family Thanksgiving is spent with a wonderful mother of a friend. I don't suffer any of the angst, anxiety, tension that I've written about, but I know for sure it exists, and it isn't very often expressed. I don't offer any answers since I don't know any, but I do love the idea of people who have unhappy families, or who are not accepted for whatever reason in those families, getting together and making their own family for the day. And being thankful, and generous, and kind this day and every day.
Posted by Nan