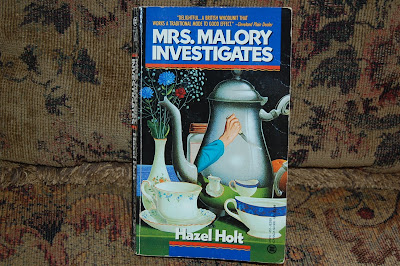 When I finished my first Mrs. Malory book, I couldn't wait to read the first in the series. As soon as it came in the mail, I put aside all the other books and began reading. What a nice, nice woman Mrs. M is. She is fifty-four years old. Her husband died two years before, and her son is at college. She lives alone with a cat and dog, and does "good works" in Taviscombe, the community where she has lived her whole life. An old acquaintance who moved away and is quite wealthy, comes back to town and introduces his future wife. No one likes her. And surprise! she ends up dead. Because Mrs. Malory is so well-known and liked in town, people talk to her and tell her things they won't tell the police. She tries to piece together the information and figure out what really happened. It was a good little story; what some call a coz(s)y and others might call a traditional mystery. I did figure out whodunit but not until the end. I enjoyed meeting the villagers, and of course the cast of characters was much clearer to me than in No Cure For Death because the reader is just being introduced to them. This is one of those series I want to read right through, and already I'm looking forward to book two, The Cruelest Month. I have a tiny gripe with the cover art; it is possible to figure out the murderer from the picture. Why do publishers do this, and particularly in mysteries??

We embarked upon one of those eager conversations that enthusiasts for a comparatively unknown author [in this case, Charlotte M. Yonge] find so absorbing, interrupting each other to praise our own favorite characters and incidents.

I sat at the table for some time, not really thinking of anything but just having what my mother used to call "a good wallow." A ray of winter sun, shining on to the sideboard, made me get up and fetch a duster and that broke the mood, and I pulled myself together and did the washing up, thinking how lucky women were to have so many little tasks that simply had to be done, so that, in the end, cheerfulness did keep breaking in.

One of the treats of buying a used book is that sometimes there is writing from a previous reader. This book had two such notes, both from 1994. One said: "Interesting read for 1st book. Made hospital time go faster - hope she writes more" and the second wrote: "Not bad. good plot." I concur completely.
Posted by Nan