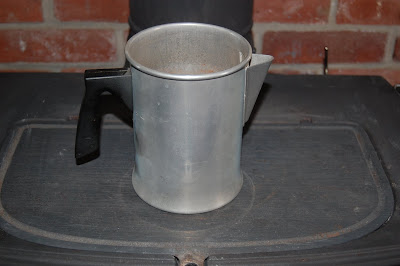 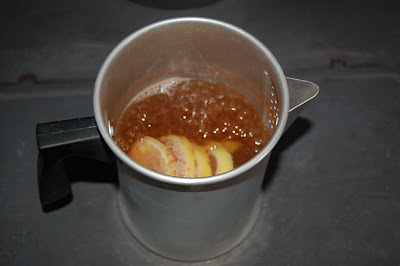 We've had quite a mild fall, and have used only the woodstove for heat. Consequently, the heat ducts haven't had any hot air going through them. In a couple days time, it has gotten very cold and raw so I've had to break down and use the oil heat occasionally. And this caused a pungent mouse smell to permeate the house. Whether a mouse was living in the pipe, or had died in the pipe, I know not, but the odor has been terrible. So, I tried burning candles. I tried spraying a perfume down the registers. Neither worked, but yesterday I came up with a solution. I took my late Aunt Susie's coffee pot, filled it with water, added some lemon slices, and sprinkled cloves and cinnamon on top, and - voilà! -the house smells wonderful with no trace of mouse.
Posted by Nan