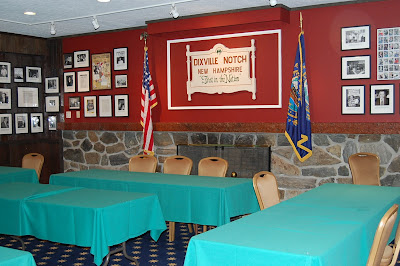 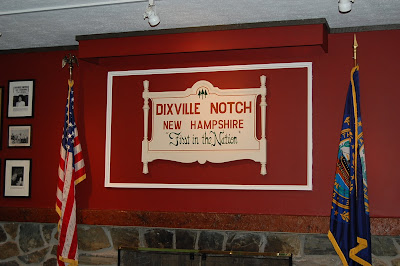 You may remember that this summer the whole family went up to The Balsams to celebrate Tom's mother's 80th birthday. Well, if you've been listening to the radio this morning, you'll have heard the name, Dixville Notch because there, along with Hart's Location, the very first voting takes place.

From the Associated Press:

Voting was carried out in a room in a local hotel festooned with political memorabilia from campaigns long past. Each voter gets an individual booth so there are no lines at the magic hour. The votes were quickly counted, announced and recorded on a posterboard that proclaims, "First in the Nation, Dixville Notch."

The name of the first voter is drawn from a bowl, and it happened to be Tanner Nelson Tillotson,the grandson of the man who started it all, Neil Tillotson. Though his grandfather was a Republican, Tanner voted for Barack Obama.

The whole thing gives me chills and brings tears to my eyes. It is the very best example of the very best in our country. The polls stay open till every single person has voted. The result:

Democrat Barack Obama defeated Republican John McCain by a count of 15 to 6.

This is the first time in forty years that a Democrat has won there.

Here is the obituary of Tanner Nelson Tillotson's grandfather from the New York Times:

Neil Tillotson, an industrialist and resort owner who became a celebrity every four years as the first person to vote in the presidential primaries and the election of the president, died Oct. 17 at a hospital in Colebrook, N.H. He was 102.

"I saw Teddy Roosevelt, I was probably 16, 17 years old, at the fairground in Morrisville, Vt., and he made a speech, and he wasn't just something to read about in the paper," Mr. Tillotson once told National Public Radio.

While running an international rubber products company out of Boston, Mr. Tillotson bought the Balsams Grand Resort Hotel in Dixville Notch at auction in 1954. He established a home in that White Mountains community, but learned that the nearest polling place, at the county seat, was 50 miles away. Still intrigued by the presidential drama he had witnessed as a boy, he had Dixville Notch incorporated for voting purposes and created an early-bird election special of sorts.

Since the 1960's, the polls at Dixville Notch have opened at midnight for New Hampshire's first-in-the-nation primary and on election days. Voters -- in some years as many as 30 or so -- cast their ballots at the Balsams. At 12:01 a.m., 100 percent of those eligible having voted, the polls close, and the wire services flash the results around the nation.

It is participatory democracy in action, but everyone has a good time as well. "Afterward, we have a little party -- but no booze," Mr. Tillotson said.

As the town moderator, Mr. Tillotson was always the first Dixville Notch resident to place his vote in the wooden box at the Balsams's ballot room.

A few other New Hampshire towns have had sporadic midnight voting, but Dixville Notch garners all the attention because the Balsams offers communications facilities for television crews, reporters and photographers.

However charming the tableau at Dixville Notch, it is no rustic New England village. It consists almost entirely of the Balsams, a luxurious getaway on Lake Gloriette, and a factory that is part of a rubber company founded by Mr. Tillotson.

He founded his own rubber company in the early Depression years, at first featuring children's balloons in the shape of a cat, then expanding into an international operation that manufactures industrial products. In the 2000 election campaign, he was still active in overseeing the Tillotson Corporation out of offices in Boston.

Mr. Tillotson was considered a lifelong Republican, but said he had an open mind in assessing a candidate. "I think the first thing you look for is honesty," he said. "The next thing is, has he got a brain? And is he emotionally reasonably stable?"

He was hardly overwhelmed by all the excitement over being the first to vote.

"The important thing is, here's a town with, for many elections, 100 percent of the voters voting," he said last year. "That's a lot more important than voting first or last."

Addendum: A while after I posted this, my friend Margaret told me that Dixville Notch was mentioned in the BBC's Prayer for the Day. Amazing! You may read it here.
Posted by Nan