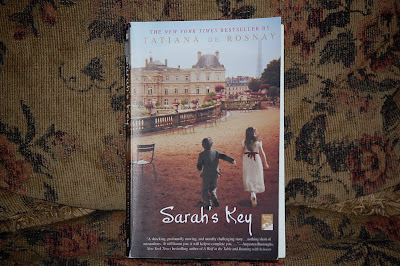 On Hallowe'en night some friends and Tom and I had an unusual evening. No, nothing eerie or scary. We went to visit our 'in-town' friends so we could see the little trick or treaters. In a while, two other couples came by and we all had dinner together. Eight adults who ate together for the first time ever without any of our children present. We remarked upon this fact quite often. As we were sitting around, a man asked Tom and I if we read. When we said yes, he began to rave about a book he and his wife had just read called Sarah's Key. The man said he couldn't put it down. Well, you gotta know this doesn't happen in my 'real' life very often. I have one friend with whom I talk books, but mostly that's it. Occasionally someone will mention a title, but for someone to love a book so much as this, well, I went right out and bought a copy.

Oh my gosh, I hated having to put it down to do other things in my life. It goes back and forth between 1942 and 2002 in France; a device I just love in books. We begin in 1942 with the dreaded banging on the door. A little girl and her mother are taken away. While they are packing up some things, the girl locks her younger brother in a secret cupboard, sure that she will be back soon to let him out. The father is hiding in the cellar when the police come. This sounds like other horror stories of the Nazi years, and it is, except for a startling fact. The men who come to get this Jewish family are not German, but French. One is the neighborhood policeman who used to pat the little girl on the head. Yes, the police are of course under German orders, but the cruelty they inflict upon their own fellow citizens makes them culpable in their own right.

In the next chapter, we meet forty-five year old American born Julia, who is married to a French man. They have an eleven year old daughter. The woman is a journalist and is going to do a story on what we now know as the Vélodrome d'Hiver roundup. On that awful day in July of 1942, thousands were taken away from their homes. She has never heard of the event. This may not be surprising because she is an American, but she finds people who went to school in France who never learned about it in school or from others. A sad, hidden secret.

Not only do the two stories alternate, they also interconnect, and there comes a point where the action stays in one period.

Some books are easier for me to write about than others. In a case like Sarah's Key, I really hate to give away the story. I knew nothing of this book except for our friend's enthusiasm, and I loved discovering the story for myself. If you want to know more details you can certainly find them at online bookstores or other blogs (though I haven't read about it anywhere yet). What I will say is that I was utterly in this book as I read it. I had to pull myself away to re-enter the world of my kitchen. I so rarely read something deemed as a 'bestseller' but I can see why this one is. I gave it to our daughter Margaret for Christmas, and she began and finished the book in a flash.

So, we have our friends, our daughter, its bestseller status, and now me. I can't imagine anyone not falling under the spell of this fantastic story. The event is true and the story is fictional, though the reader feels certain that it is real in many ways. The book is suspenseful and warm at the same time. We feel for the woman in the present day, as we feel for the young girl in 1942. Excellent book, that's all I can say.

Sarah's Key was great way to end a great year of reading. I won't do any favorites lists, other than the crime fiction one I did the other day. Mostly each and every book was my favorite while I was reading it; from Laurie Colwin to Henning Mankell. In general, I don't read books which I don't love. If I don't enjoy being within its pages, I put it aside and pick up another. Reading is my fondest pastime, which the dictionary tells us is:
an activity that someone does regularly for enjoyment rather than work.
Exactly.
Posted by Nan