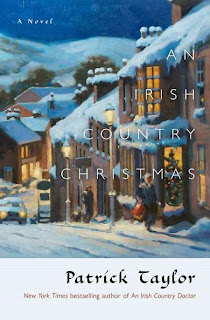 
Time is the oddest thing. As I listened to this really terrific story, I was reminded of when I first watched on PBS, and then read, the James Herriot stories. I thought to myself that this could be the same kind of heartwarming story for Northern Ireland as All Creatures was for Yorkshire. And then, (this is where time comes in) I realized that when I first learned of the Herriot books it was the 1970s and his tales are set in the 1930s. So, I was looking back forty years. And then I realized that this book is set in 1964; forty-five years ago. And the part that astounds me is that I was 16 years old then! Is this possible? I don't think so. I think it has to be some kind of trick time is playing on me.

I had never heard of Patrick Taylor's books until I happened to see this cd at the library. He is a very good writer, and this book is filled with details of the village, Ballybucklebo and its inhabitants, and the work of country doctors during this time. This one has a Christmas theme, with the younger vet, Barry Laverty disappointed that his girlfriend, Patricia may not be coming for Christmas. The older vet, Fingal Flahertie O’Reilly (named for Oscar Wilde), wonders if he can reconnect with a woman from his youth. The housekeeper in this book is Mrs. Kincaid, who takes care of the house and the meals, and the men, as well. A serious concern in An Irish Country Christmas is the arrival of a third doctor in the area. Are there enough people to support three doctors? And then they begin to hear of some very odd treatments the new doctor is offering. A woman nearly dies because he hasn't dealt properly with her situation. Though this is the third book in the series, I didn't find it hard to follow. I was completely charmed by the setting, the story, the Irish lilt in the excellent narration. I've now begun the first book in the series.

You may visit the author's website and read about the books, the area, the dialect.