A Rumpole Christmas by John Mortimer 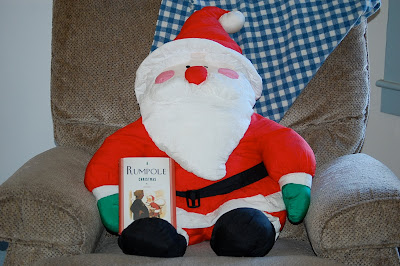 
What a pleasure for fans of the late John Mortimer to have this collection of Rumpole Christmas stories. I don't know if the author planned for their publication or if someone else decided to compile the themed tales for this first Christmas after Mr. Mortimer's death. They were published in various places between 1997 and 2007. The titles are:

Horace Rumpole is such a wonderful character. He is very much a 'what you see is what you get' sort of person. He doesn't change. He's who he is. He sees the worst side of people, and often is the man defending them in court, yet he is still cheerful, and gets great satisfaction from his simple pleasures: his wine -


I filled our glasses with Château Thames Embankment. His Lordship drank and pulled a face. "I say, this is a pretty poor vintage, isn't it?'
"Terrible," I told him. "There is some impoverished area of France, a vineyard perhaps, situated between the pissoir [look it up!] and the barren mountain slopes, where the Château Thames Embankment grape struggles for existence. Its advantages are that it is cheap and it can reconcile you to the troubles of life and even, in desperate times, make you moderately drunk.


Christmas was not usually much of a "do" in the Rumpole household. There is the usual exchange of presents; I get a tie and Hilda receives the statutory bottle of lavender water, which seems to be for laying down rather than immediate use. She cooks the turkey and I open the Château Thames Embankment, and so our Saviour's birth is celebrated.


... bacon and eggs with sausage and fried slice

He is one of those rarities: a happy, contented man who doesn't think about his life. He simply lives it.

I'd read only one of the stories before, but really I can read any Rumpole story or book over and over again and receive the same deep pleasure every time. I love the character as if he were a real person. From what I've read about John Mortimer, he was a bit like Rumpole himself: a man who was who he was. A man with warts he didn't try to hide. A man who loved life. As his daughter, Emily Mortimer wrote:


He had caused plenty of trouble in his life, but he died wishing he could have made some more. Morally, my dad was at best naughty, at worst selfish and in his own words 'greedy.' If he were ever to have been psychoanalysed, it would have been decided that he had all sorts of hang-ups and 'issues.' But as it was, he got away with it. He was always being let off the hook, for the simple reason that he was the best company in the world. People who live life like there's no tomorrow are famously good company. But the ones who are also bright, funny, kind and original are just plain killer.


May John Mortimer rest in peace, but still be having a good time wherever he is now.
Posted by Nan