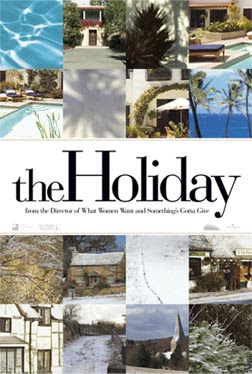 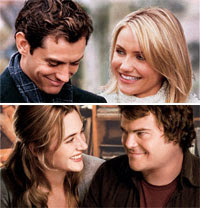 I love, love, love this movie. It is about four people, each with their own problems and imperfections, who find out who they really are and thus find true happiness during a Christmas holiday.

Cameron Diaz plays a movie trailer company owner in Los Angeles who has just found out her live-in boyfriend is cheating on her. She's mad, she throws things, she socks him, but she doesn't cry.

Kate Winslet plays a journalist in London who writes about weddings, and has been in a hopeless, three-year relationship with a co-worker. He has just announced his engagement to someone else who works in the same office.

Jude Law works in the book publishing business in London, and is involved in meaningless one-night stands.

Jack Black is a movie music writer who has a girlfriend of a few months.

How all these people come together and change one another's lives is the 'plot' of the film. The women do a house exchange for the Christmas holiday which is how Diaz and Law get together, and Winslet and Black become friends. Another very important, and inspired, character in this film is an old Hollywood screenwriter played by Eli Wallach. I don't think I've even seen him in a finer role. He is subdued and subtle and thoroughly loveable. He and the Kate Winslet character form a quick, yet firm and lasting friendship which emboldens both of them.

That's about all I want to say in case you haven't seen it. I wouldn't want to spoil this really wonderful story for you. I'll just add that I think I'm a little in love with Jack Black when he plays a calm, romantic character. Of course, I think he is superb in movies such as High Fidelity and The School of Rock but I think Hollywood should offer him more of these toned-down sorts of roles. And Jude Law is as beautiful as ever in this film, and his character such an appealing one. Kate Winslet is utterly wonderful in the role of a woman who just can't get herself out of this 'toxic, twisted' relationship. And Cameron Diaz hasn't cried since her parents broke up when she was a teen. You bring these personalities together, played by actors who truly make the characters come to life, and you've got a terrifically entertaining and enlightening movie.

Oh, and the Cotswolds' house is my perfect home. It was manufactured specially for the movie. The outside, the setting, and the rooms are my ideal. I pause the dvd just to look at the shelves and dishes and tables and lamps and books. I so love it.
A little PS:
There is one more thing I'd like to mention. There is a little homage to one of my all time favorite movies, A Man and A Woman. The writer, director, and producer Nancy Meyers offers a playful short scene with the Diaz and Law characters. There are no words spoken but he picks her up and swings her in his arms; she is wearing much the same coat as the Anouk Aimee character, and even has the same hairstyle.
Posted by Nan