Mrs. Malory and the Festival Murder by Hazel Holt 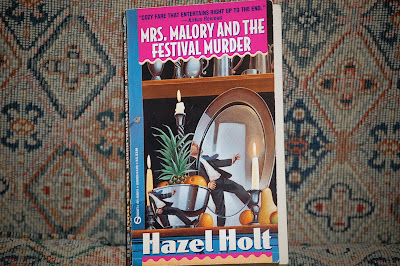 
In this Mrs. Malory book, a thoroughly unpleasant man is killed, and everyone wonders how and why and whodunnit. But the mystery is the smallest part of these books for me. Here are some snatches from the Festival Murder that will give you an idea of this book, and a flavor of all the Mrs. Malory books.

The high-spot of any stay in a hotel for me is the Full English Breakfast. At home I rarely have more than a slice of toast and a cup of tea, but when I'm away I always go the whole hog. This particular morning my plate was deliciously full of bacon, egg, tomatoes, mushrooms, black pudding, and fried bread and I sat and contemplated it with satisfaction.

Time passed quickly, as it always does in the summer months - it's extraordinary how slowly time passes in the winter...

In the taxi going to Paddington, though, I realized that I had done it again. I'm always very early for everything, not just punctual, but very early indeed. It is something I have passed on to Michael [her son], something, he maintains, that has shortened his life. "The time I spend waiting about, Ma," he says, "I could have not just read War and Peace - I could have written it!"

No one can be lonely with a houseful of animals.

... I stuffed clothes into the machine, secure in the knowledge that I could now say to myself that I had Done the Washing (this is a form of conscience-salving every woman is familiar with) and could now go out and potter round the shops.

Though these mysteries would definitely be categorized as cozy, they are not simple. They are very well-written. The people are complex. The crimes are not pretty, though they do happen, as they say, 'off-screen.' They are all one could wish for in an English village mystery.
Posted by Nan