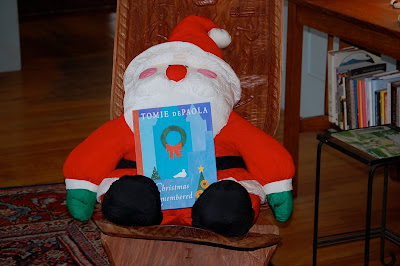 I discovered Tomie dePaola when my children were little. We spent wonderful hours reading together and I marveled over both his stories and his artistic genius, but what struck me most in each of his books was his heart. The man has a heart as big as the sky and it comes through in his characters, his stories, and his illustrations.

It just so happens that Tom's parents live in the same town as Mr. dePaola, and are acquaintances. One year they went together on a group tour to Provence. That same year, Tom's parents gave us his then new book, Christmas Remembered. 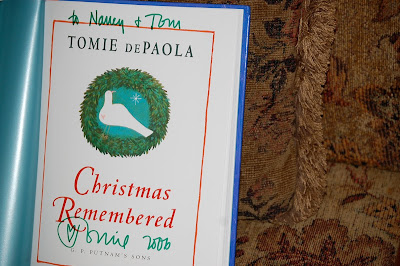 Christmas Remembered gives the reader a deeper, more grown-up appreciation of Tomie dePaola. The concept is fascinating, and one I've not read before: he reminisces about various Christmases in his 'seventy-plus years.' Each chapter covers a different Christmas season. One of my early favorites is the year he got art supplies. He was eleven, and had been saying since he was four that he was going to be an artist when he grew up. 'Everyone had believed me.'

I loved reading about Tomie dePaola's childhood in Meriden, Connecticut. He grew up in a happy family with a brother and two sisters. I had a feeling of a time gone forever as I read the stories of his young life. There was a local candy store where he worked one Christmas season. There was a 'Christmas sing' at the high school. The school chorus went caroling around the city. His parents, Flossie and Joe had an 'open house' every Christmas Eve.

All the neighbors came, as well as my parents' friends and family from all over Meriden and Wallingford. The drinks were served in the half of the basement my father had fixed up with booths and a genuine bar. "Just like a real nightclub, Floss and Joe," everyone said.


One Christmas he writes about was the first one they had a television set, and all the people they knew, and many they didn't, showed up to watch the Joe Lewis/Jersey Joe Walcott fight, live from Madison Square Garden.

His first Christmas away from home, he went shopping in New York City, and got his mother a handmade silver heart pin.

I guess that was the very beginning of my love of the heart as a personal trademark.


If you look carefully, you'll most often find a small one in each of his paintings.

I don't really have a favorite among all his Christmas memories, but I do love one that he spent at Weston Priory in Vermont. At twenty-two years old, he was a Benedictine novice, and was part of a little miracle that happened there.

His Christmas in New Mexico was very different from anything I've ever known, and so, so lovely with poinsettias everywhere, and its tradition of Las Posadas, a walk around the Plaza in Santa Fe in which Mary and Joseph look for a place 'where the Child could be born.'

This is a really special book, and has become one of my Christmas favorites. I've said it is more for adults than children, but the author says at the start:

I have tried to be as honest as I could with everything in this book, including the holiday eating and drinking in my family, but if you want to read this to your children, grandchildren, or your classes, feel free to "edit" or omit the drinking spots.

Coming from an Irish-Italian family, we always had "spirits' in our hearts, our life, and in our glasses.