Arlington Road, October Road, and now Revolutionary Road - what is it about all these 'roadshows' that capture my imagination and my high praise. Well, the first is full of suspense and the knowledge that not all is as it seems. October Road is a short-lived television series, a blog post on which I am currently working, and then we come to Revolutionary Road.

On Wednesday evenings at 5:30, Tom is the volunteer projectionist at our little town theatre for the 2-for-1 show. Two years ago, I wrote about many movies we saw there (you may find the reviews on the sidebar under the letter topic Movies at the theatre), and then last year I didn't write at all. I don't know why. Well, maybe I do. The films weren't, in general, very cheerful and light. Some were troubling like 4 Months, 3 Weeks and 2 Days, not an easy movie to watch. And then there is In Bruges, one of life's guilty pleasures. I say that because the language and violence are appallingly vulgar, and yet, and yet, there was great humor and as we all walked out we didn't know if we should be embarrassed to have laughed so much and so often at such a film. There was a particularly fascinating look at the immigrant experience in The Visitor. And The Band's Visit was a sweet, quiet little movie.

Anyhow, I intend this year to write about the movies I see, and I begin the season with Revolutionary Road. When I awoke this morning, my first thought was that Revolutionary Road could almost have been a silent film. Not that there wasn't plenty of talking (and shouting) but that what I recall are the scenes - the visual scenes, the wordless scenes. All those men in their suits and hats sitting in the train, walking together, all identical except for their faces.

The scenes in the sunny perfect kitchen 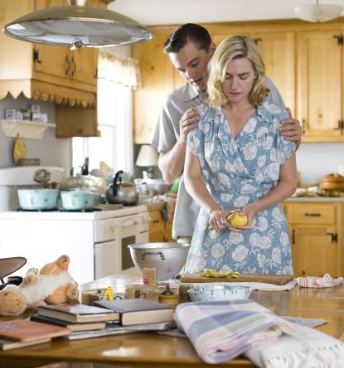 Scenes in the sterile living room with its uncomfortable looking, but oh-so-modern furniture. 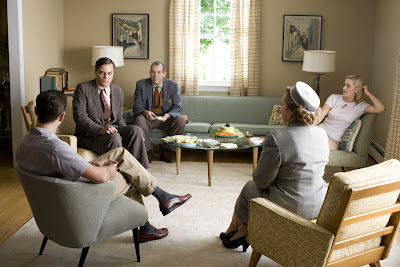 The house on the rise in the neighborhood so alone in the midst of other houses. The green, green wood. A dance between two people, married but not to each other, which became silent as the scene progresses - just two people soundlessly going through the physical motions - and that phrase is key: these people in this time in this film are going through the motions of living.

When people talk, very little is really said - the conversations are stilted and stiff. Tom's first impression was that their verbal expressions 'seemed almost cliché.' All the characters, that is, except one. The real estate agent's son, who has had many electric shock treatments to calm his strong emotions is quite like the fool in dramas; the person who sees all and speaks the truth. He is the person who makes more 'normal' people afraid. He is played by Michael Shannon who does an unbelievably good job. 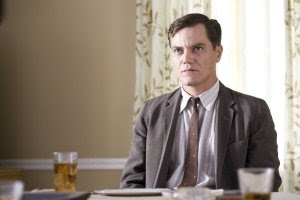 It seems almost melodramatic to say these people are trapped. They have a nice home, a family, and he has a good job; maybe not wildly exciting or stimulating but still it allows him to live a very nice lifestyle. They are not homeless or ill. But yet, we all know that comparisons with those less well off never work when we are feeling badly about ourselves or our lives. They are stuck in the roles society has proclaimed for them.

I was struck by how very alone they are. There is a mention of the man's late father, but only in the context of his job. There are no other relatives. There are two young children, but as Roger Ebert says in his fantastic review (please do read it if you have a chance), 'Their children are like a car you never think about when you're not driving somewhere.' We barely see them in this household. And there are no dogs. It is a lifeless existence. Thoreau's words jump into the viewer's mind: 'Most men lead lives of quiet desperation and go to the grave with the song still in them.' I hear the words to Eleanor Rigby, 'ah, look at all the lonely people.' There's a scene in the morning when the woman looks at her street, and it felt like a post-nuclear accident had occurred. No one is around. The isolation is extreme and felt throughout the movie. Tom was particularly struck by a scene where a man turns off his hearing aid while his wife drones on; the ultimate distancing of oneself from another. They have one set of friends, but they seem like friends of convenience, just because they are near neighbors. 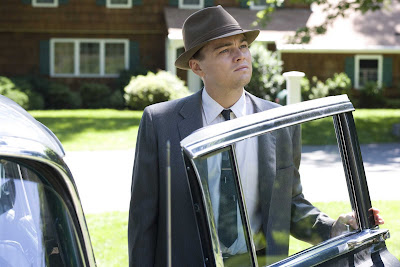 Revolutionary Road stars Leonardo DiCaprio and Kate Winslet who play Frank and April Wheeler, a couple who live in suburban Connecticut in the 1950s. They are brilliant. They are so good I forgot they were big stars. They were those people. I was completely caught up in their story. It would be easy for us fifty years on to look at this couple with critical eyes. But who is to say it is really that different today?

At one point, Frank speaks of 'hopeless emptiness.' The Michael Shannon character John replies, 'Hopeless emptiness. Now you’ve said it. Plenty of people are onto the emptiness, but it takes real guts to see the hopelessness.' We can possibly live with the first, if the second is not there. We all need hope, and if it is gone, what is there?

I don't have enough words of praise for Revolutionary Road. It captures these young people at a juncture in their lives and shows us what happens when one path is taken over another. They are real. The movie is authentic. I ask no more from a film.
Posted by Nan