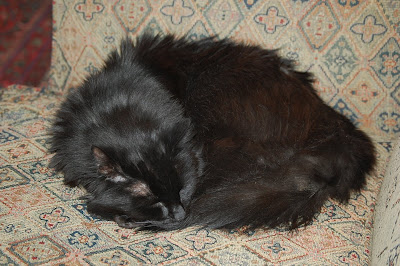 I wanted to pass along some information regarding my cat, just in case even one person is in a similar situation. Our Soot will be 16 this year. He was always a chubby cat, until the past couple or three years when he began losing weight. Because this has happened before when our cats got older, we didn't think a lot about it. Still, I began to worry when he became really skinny and bony. At his annual vet appointment, nothing unusual struck the vet's notice. He thought he was doing well for his age, and he really was in many ways. Still active, running up the stairs several times a day, and interested in the life around him.

However, he wanted to eat all the time. He would eat ravenously for a minute, and then stop, leaving the rest of the food. This happened five or six times a day. I thought maybe he had worms and was going to have him tested.

And then, Tom's co-worker mentioned that her older cat was on medication for a thyroid condition. As she listed the symptoms, Tom was amazed: skinny, hungry all the time, rushing around (we called Sooty 'Charlie Hustle'), while seemingly okay otherwise. The next day I called her vet. Sooty went in and had blood work done, and the results showed that he did indeed have this same ailment. He has been on medication twice a day for almost a month and is so much better. He wants to eat only a couple times a day. He can relax. He's not always running around seeming anxious. He's his old happy self again. One of life's little miracles.
Posted by Nan