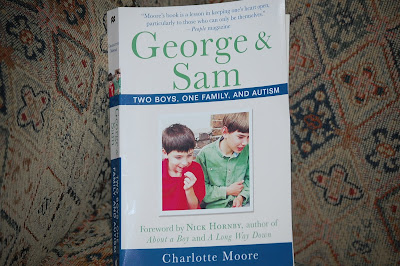 
George & Sam may be read as a parenting manual. My 'gurus' were Penelope Leach, Benjamin Spock, and Louise Bates Ames and Frances L. Ilg. I would now add Charlotte Moore to the list if I had little ones today. I garnered so much wisdom as I read this book. Though society may look upon her as a mother of two autistic children, I soon learned that she is a mother, period. She would never call herself a heroine, but she is, as all mothers (and fathers) are. As the aforementioned writers do, Moore suggests that we trust ourselves as parents. We know our children best, and no book can be a complete guide to raising them. A case in point: the Ames and Ilg books (Your Three-Year Old, Your Six-Year Old, etc.) were right on the money for one of my children, and barely applied at all to my other one. As Moore writes:

like most aspects of child care, it makes sense to adapt the rules to what suits you and your family.

The main thing is to get in tune with yourself, with what you can and can't tolerate.

The author's youngest child does not have autism, and one of the great facets of this book is how she manages to balance the needs of each boy. We all do this every day if we have more than one child, but imagine having two boys with autism, and one who doesn't. It isn't quite the same as having one child who is athletic and another who is artistic. To complicate matters, George and Sam are very different from one another; so much so that in his younger days, she did not think Sam was autistic.The autism affects every single minute of Moore's life. She is very open about things that may have gone unmentioned before. As parents, we fully expect diapers that fill up at inconvenient times, and 'accidents' as our children learn to make the transition away from diapers. But Charlotte Moore must deal with the fact of playing with feces, and using odd places for the toilet. And honestly, as I read, I felt like it was all in a day's work for her. She is the best, best kind of woman - one who just 'gets on' with things, that wonderful British expression. She doesn't moan and say, poor me, look what I must deal with. She acknowledges the bad and praises the good. She accepts because she must, the fact of daredevil behavior such as climbing onto the roof. Autists have a high pain threshold, and she notes pulling food right out of a hot pan and licking the pan.

She disabuses us of the 'Rain Man' idea that autists have brilliance in certain areas. In writing about George's memory in the early days of childhood, Moore tells us:

This prodigious memory is fairly common in autists. Of course at the time we interpreted it as yet another manifestation of his amazing intelligence. George still has a retentive memory, though he's less interested in using it. He still learns new songs quickly, and knows the dialogue of his videos by heart. It's the closest either of my sons gets to the "savant" skills possessed by a small minority of autists. Savant skills feature disproportionately in the public consciousness. This isn't surprising, because it is fascinating to come across someone who can do calendar calculation in the blink of an eye, or someone who just has to glance at a complicated architectural structure in order to reproduce it on paper with accuracy and panache. But it should be reiterated that most autists have no such skills.

And even if they do, their talents may be of limited value. With autism, one skill doesn't lead on to another in the way one might assume. The boy who can tell you the day of the week for any date you care to fire at him doesn't necessarily have ability in any other mathematical area. I knew a child who at five could reproduce sections of road maps; this hasn't led to any wider interest in cartography or town planning. It was just a knack. George's early love of language didn't encourage him to learn to read or write.

... autistic children, whose skills resemble an archipelago of islands scattered across a sea of confusion. Most of the islands aren't even within hailing distance of one another. Just sometimes, autistic skills come together and cohere to excellent effect.

As a reader might expect, Charlotte Moore writes honestly about the day-to-day and long-term repercussions of having two children with such a syndrome, but you may be surprised to come to a chapter called 'Compensations.' Yes, there are good things about one's children being autistic. She begins by saying,

Have I made life in an autistic family sound like hell? That hasn't been my intention. There are moments of extreme stress, but isn't that the case in most families? Our tensions, our flash points, are different from those of your average family, but who's to say they're more intolerable?

Our family life has its own rhythms, its own compensations. Every day, the boys make me feel bored and irritated; equally, every day they provide me with delight, amusement, and joy.

You may know that the writer Nick Hornby's son is autistic. He concludes his prologue to George & Sam by saying,

To what extent are we really prepared to accomodate our children? Are we properly equipped to love them the way they are? If our lives do not turn out the way we had hoped, what is the best way of living them? Do six After Eights constitute a decent breakfast? Charlotte Moore knows, but I'm not telling. You'll have to read this wonderful book to find out.

If I still gave books a grade, there wouldn't be enough pluses to put after the A for George & Sam. It is an excellent book. I loved every minute I spent in the company of this family. I hope she writes more as the boys get older. I want to continue their life's journey along with them.
Posted by Nan