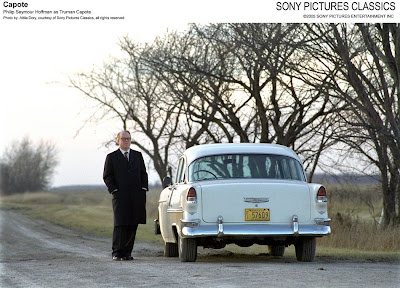 When I first saw the preview to the movie, Capote, I was stopped in my tracks by how Philip Seymour Hoffman captured Truman Capote; his appearance, his voice, his mannerisms. The actor was channeling the writer. I was just amazed. However, I put off seeing the movie. I had read In Cold Blood when it first came out and recalled all too well how frightening it was. I wasn't sure I could watch a movie about this killing of a Kansas family in 1959. Last week I was at the library, and was looking at the dvds, and I picked up Capote. A young girl, a former student of Tom's, told me it was great, so I brought it home. I figured I could turn it off or leave the room if it got too intense. Well, I didn't do either one. I was captivated. I was astonished by its perfection; perfect in portraying those years, perfect in the photography of the setting, and as I knew already from the preview, perfect in the characterization of Truman Capote.

The movie was less about the killings than it was about what happened to Truman Capote as a result of them; what writing about them did to the author. It was literary, which befits a movie about a book and a writer. Capote was a serious, excellent author and at the same time a real party fellow. He particularly cared for one of the killers, in part because he felt they had much the same childhoods. He says in the movie that it is like they lived in the same house, and when they grew up the killer went out the back door and Truman went out the front. As Phil Ochs sang, "there but for fortune go you or I." And though he cared for him and got lawyers to plead the cases, at the same time he could not finish his book until they died, so a part of him wanted their end to come. It is thought to be the best work he ever did.

No one will ever know what 'In Cold Blood' took out of me. It scraped me right down to the marrow of my bones. It nearly killed me. I think, in a way, it did kill me.

The movie simply could not have been better. One of the extras on the dvd features a talk with Gerald Clarke, who wrote the 1988 biography of Truman Capote. I read it last year and liked it very much.
Posted by Nan