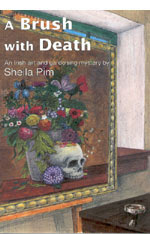 The August-September Garden Bloggers Book Club choice was a cozy gardening mystery. We could read the one suggested or any other that fit into this category. I chose one I've had on my shelves for a while called A Brush With Death by Sheila Pim. It was written in 1950, and recently reprinted by the great Rue Morgue Press which specializes in bringing back older mysteries.

This book was definitely a cozy, so cozy in fact that there isn't even a murder! But what there is, is sharp, witty, humorous writing which gives the reader a real sense of what Dublin and the surrounding countryside was like in this earlier time. Unlike many more recent cozies I've read, this one isn't a quick read. The writing has a richness that slowed me down and made me pay attention.

Though the subtitle is "An Irish art and gardening mystery" it was much more an art mystery. An artist is being poisoned with arsenic, a young woman is having her portrait painted by another artist, there is an art dealer, and an art collector. But two of the main characters are gardeners, and we are treated to a description of a room and their life.

They were sitting in Paul's study, the room they all preferred when they were by themselves. It was devoted, in a tidy businesslike way, to hobbies. It was the room where they kept most of their books, on metal shelves which, though more utilitarian than elegant, toned with the plain brown curtains, the brown leather chairs, and the matting on the floor. Gardening catalogues were kept beside Paul's chair under the wireless. A desk in the square bay window was occupied by six bowls of bulbs, still only in leaf, and some late pears, put there to ripen. The whole room was scented with a single twig of Chimonanthus, flowering for the first time in their garden, and a symbol of triumph.

Gardening had grown on Paul and Hester with the years. Hester had never from the first felt worthy to be her husband's partner at bridge or golf, and Paul had never much cared for doing things without her. He had been sociable with his kind in his earlier years, but had now reached a worldly eminence where he need no longer concern himself about making contacts and was settling down to be his true self, domesticated, stay-at-home, and fond of home-grown fruit and vegetables.

Another gardening reference is to a "landed gentleman" in the country who does not spray his crops with insecticide, and:

... goes roaring up and down the land scolding farmers for polluting the ground with artificial manures.

This same fellow later talks about a problem still with us, the lack of diversity in crops.

Every intelligent person ought to take some interest in apples. You eat them, don't you? Then you ought to see that you get the best. I suppose you'd never think of asking for White or Scarlet Crofton, Sam Young, Gibbon's Russet, Cockle and Whitmore Pippin, Cluster Pearmain, Cat's Head, Nonesuch, Hall Door, Cockagee? The chief superintendent shook his head. Of course you wouldn't. You've never heard of them, let alone tasted them. Nobody now grows any but the commercial varieties. Big croppers and poor eaters. A big turnover and a quick sale. That's all your commercial grower cares about. Nobody bothers to select fruit for its flavor; we've almost lost the sense of taste.

I was flabbergasted to read this in a book written so long ago. That is the wonder of reading a book actually written in a time, instead of an historical novel.

Another passage is even more forceful.

I, and a few others, are doing our best against heavy odds to educate public opinion, and farmers, and governments, against our present crazy methods. This is what happens: the-get-rich quick way is to load the soil with artificial fertilizers, which for a time yield large crops of grain and vegetables. But these crops are inferior in food value to those grown on wholesome natural humus. They lack the essentials on which our populations depend for stamina. Resistance to disease is weakened. The future of the race is jeopardized. And the soil is left impoverished.

These are the few sections where plants are even mentioned, except for one shining moment when the whole case is opened up because the previously mentioned Hester knows the painting is a fake because "there couldn't be dahlias before 1789. They were first introduced into Europe from Mexico in the year of the French Revolution."

From these excerpts, you may deduce that the book is didactic and serious, but it isn't. It is light-hearted and extremely funny, in a quiet sort of way. There are great details of the way policemen must slog along to solve a case. These, too, are presented with droll humor.

The book offers two of my favorite elements in a mystery story; one is a cast of characters at the beginning of the book, and the other is an acknowledgment of the reader.

Now an idea which may be in the reader's mind already had occurred some minutes earlier to Detective Officer Lemon.

Even though this wasn't so much a gardening mystery, I thoroughly enjoyed reading it. If you like the older style of mystery, with descriptions of countryside and houses, with nothing very grim, and great characterizations, I think you would find this very appealing.