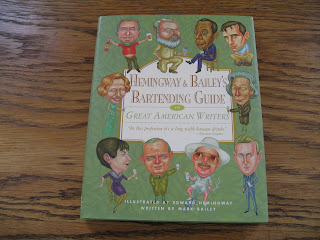 This book grew out of a simple observation: writers like to drink. Not all writers, of course, but most. Or at least they used to. The writers in this book, for example, forty-three great men and women of American letters. From James Agee to Thomas Wolfe, the list includes five Nobel Laureates and fifteen Pulitzer Prize winners, Academy Award winners, and just plain best-sellers. It's a who's who of our nation's most accomplished novelists, short-story writers, poets, playwrights, journalists, and critics. And they all loved their liquor.

They go on to say:

The two of us were talking about this one snowy night a few years ago. We were at a Christmas party in a bar in Greenwich Village, sitting on barstools drinking beers and feeling a touch nostalgic. The night had not started out that way. For any number of reasons (the cheer of the holiday season, the beauty of snow falling in New York, the pleasure of an open bar), we had been looking forward to a pretty serious bender. Yet to our surprise, the party was not with us. There we were, in a bar filled with writers, and the crowd could not have been more tame.

When asked about writers and their affinity for alcohol, Truman Capote quoted Irish playwright Brendan Behan, "We are drinkers with writing problems." It was a confession of sorts, that the scales had tipped for him. Maybe they tipped for other writers in this book too. Why did they drink so much? Did alcohol help or hurt their writing? These are worthwhile questions and there are no easy answers. But then this is, after all, a bartending guide, and who are we to say.

One thing is clear: however pickled these writers may have been, they left an extraordinary body of literature behind for us.

The book contains wonderful, wonderful drawings, a quote, a drinking story, a little biographical information, a cocktail recipe, and a literary excerpt for each of the writers. A writer gets two pages. The book is beautifully designed. Here is a view of one of my very favorites, Robert Benchley. 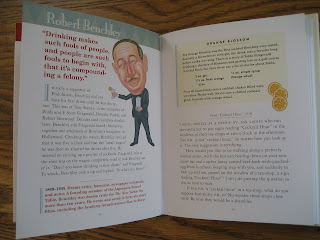 Have you noticed in the past few years that there has been an increased interest in cocktails and the cocktail culture? From Oprah's Pomegranate Martini to the Sex and the City Cosmopolitan, to the Pottery Barn's Mojito Mix cd, to the appeal of Frank Sinatra and Dean Martin, right through to this new book. It's an interesting cultural phenomenon.
Posted by Nan