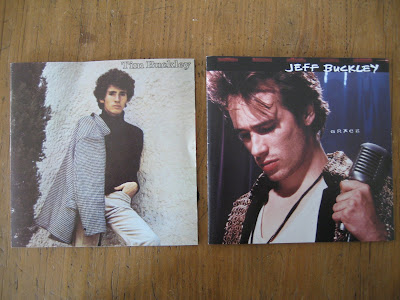 Two albums, 25 years apart. This could have been something wondrous; a father and a son, both excellent artists, each album a tremendous musical achievement, but no. The whole story is just so sad, so tragic that if it were a piece of fiction a reader might think it was too improbable.

Their dates say so much:

My husband and I loved Tim Buckley from the first time we heard him. What a voice! And the songs were so different, so very special. Our first apartment had a big poster of him up on the wall. He died of a heroin overdose.

I was late coming to Jeff's music, but now that I know it, I love it. He drowned in the Mississippi River.

It says online he met his father just once, when he was eight years old. By the time Jeff was nine, Tim Buckley was dead
Posted by Nan