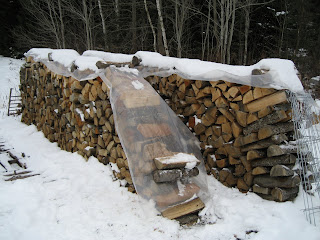 "Half the wood and half the hay, you should have on Candlemas Day."

We have a little less than half left, but, in my husband's words, "that's usual for us because it's colder in November and December than it is in March and April, the ending months of the cold season. It would be more important, I would think, to have half your hay because animals eat the same amount whether it's warm or cold out." We buy our hay weekly rather than store it at the farm.
Posted by Nan