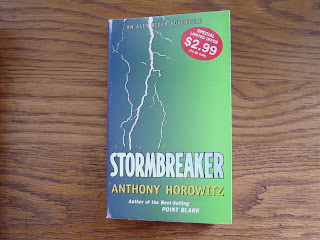 I've been wanting to begin this series about a 14 year-old spy for a long time, and was so pleased when a friend loaned me the book. I've enjoyed the British television program Horowitz writes, Foyle's War, so I was quite certain of good quality writing. I love spy stories from The Thirty-nine Steps by John Buchan to the Mrs Pollifax books by Dorothy Gilman.

The story begins with young Alex Rider's uncle and guardian dying in a car accident. Alex begins to wonder because the uncle was not buckled, and that was not like him at all. Then some strange people show up at the funeral, one of whom has a gun. The story goes on from there at a fast pace. The book was a pure pleasure for me to read. It has all the fun elements of a good spy novel, from a modernistic factory compound out in the middle of remote, beautiful Cornwall countryside to a weird giant jellyfish in a fish tank (shades of a James Bond movie). He is even given some 007 type gadgets to get him out of tricky situations. Alex is a reluctant spy, but we see that his late uncle has actually been training him for the job all through his childhood. I can't wait to read the next books in the series, and to see the movie based on this book.
Posted by Nan