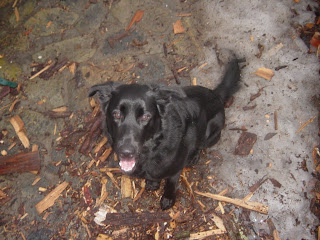 This is the very first photo we have of our Ben. His story has a hint of the miraculous about it. In the 25 years we have lived out in the country, only one stray animal, a kitten, has ever made it's way to our home, until the night of March 5, 2004. In the weeks before, we were having our downstairs bathroom changed over into a bathroom/laundry room. The old fan was turned into an outside light that shone out into the north pasture. The very first night we turned it on, I was downstairs alone around 10 pm. Suddenly, I saw, sitting in the glow of that light, a black dog. Once he saw me, he followed me from window to window all around the house, ending up on the front terrace. I went out to visit him, and it was like we were long lost friends. I could tell right off that he was a wonderful dog. The evening was mild for March, so I put a blanket down on the porch with some water. I thought, we'll see if he's still here in the morning and he was waiting at the door when we got up. We let out our other two dogs, and they were all fine together. Then came the hard part. We called the police in the two nearest towns, and the vet to see if anyone had reported a dog missing. No one had, thank goodness. We waited a few days, and then brought him up to the vet for a checkup and shots. Other than being a bit thin, he was in good shape, and they thought he was probably under two years old. He had been neutered, so someone had taken care of him. Who knows his story, but we find it a wonder that the light went on and he came to it. We call him the "wise dog" following the light.

Our daughter was married at home a couple months after Ben arrived, and he was the "wedding dog". He is in a lot of the wedding pictures, including the one of the whole family which was our Christmas card that year.
[addendum: the marriage ended in divorce in 2007.]

He is the fellow who takes care of us. If I should have even the slightest sound of sadness or upset in my voice, Ben is there beside me, putting his head in my lap and looking up at me with those brown eyes. If one of the dogs is outside wanting to come in, Ben lets us know. He is such a great dog, and in many ways, the very best we've ever known. At the time of his arrival, we were watching all the dvds of Friends, and his name came from Ross' baby son. 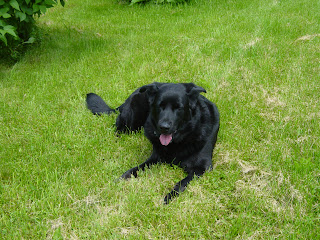 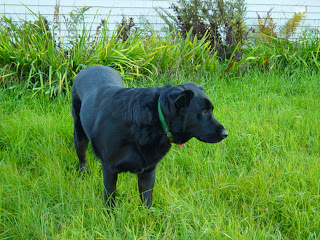