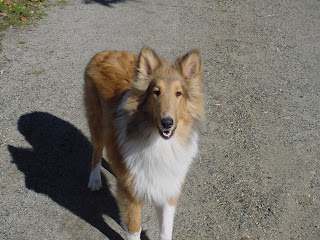 In January 2000, I began reading P.G. Wodehouse for the first time, and when we got our Collie in April of that year, we named him after a Wodehousian dog.

Everything you may have read in the books by Albert Payson Terhune about Collies is true. All those traits we saw in the Lassie movies or tv show are real. They are the best dogs. They are true companions, they love children, they are loyal and trustworthy. MacIntosh is such a wonderful dog. He loves his family, but he also welcomes anyone who comes to visit. He still remembers the first two people outside the family he met when he was a pup, and always gives them special attention.

When he was younger, he developed epilepsy. He had a lot of terrible seizures before it was finally brought under control. He loves bread, and we have learned the hard way that fresh bread must be placed far back on the counter. He'll come from anywhere in the house if he hears us slicing it. He gets haircuts in the summer because he doesn't like the heat. He loves the snow and will happily lay in it for ages even on this snowy/sleety day, as you can see in the last photo I just took from the kitchen window. 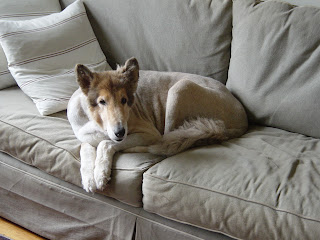 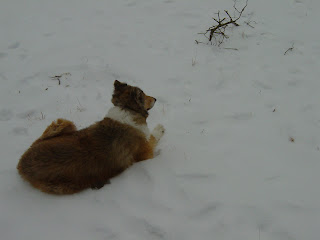