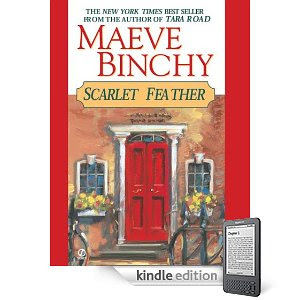 If pressed to name my favorite Maeve Binchy book, I think it would have to be Scarlet Feather. This is my second reading, and now that I own it, I will probably read it again and again. I love these characters. Cathy Scarlet and Tom Feather want to begin a catering business. Cathy is married to a lawyer, Neil who works hard to help those who don't always get legal support, and Tom is in love with Marcella, a beautiful woman who wants to be a model.

Cathy has spent her whole married life feeling that her mother-in-law was disappointed that her son married a woman who didn't come from a 'good' family. Cathy's parents are dear people; 'salt of the earth' as they say, except that her dad is a gambler whose every penny goes on a bet. Cathy's mother is a hard-working house cleaner, and in fact was the cleaner for Neil's family. Neil's uncle and aunt's family life is terrible. The man is gone all the time and the woman is an alcoholic. Their older son is a selfish crook, and the two young twins are a sad case. No one wants them. Maud and Simon are two of the dearest children I've met in literature.

All this may sound dismal, like one of those gloomy books I steer clear of, but it isn't at all. These facts are dealt with in a very matter of fact way. There is a lot going on in the book with various family members. There isn't any melodramatic event; there is no startling tragedy. Life just moves along in its pleasant, trying, troublesome, humorous way. Problems come up, but they are solved. Not everyone is bubbly and happy, but there is no sense of life not being worthwhile. Indeed, it is just the opposite. This is one of the most life-affirming books I've ever read. People have an outlook that is encouraging and exemplary.

The book also details two breakups. The slow coming apart of a couple is so well done. And, I expect, very true. People do go in different directions, and as we see in this book, it is often their careers that come first. Their jobs take a tremendous amount of time and energy. There is no time to talk about the big or little things. The book is an example of the opposite of Del Griffith's motto in Planes,Trains and Automobiles: Like your work, love your wife.

If you've never read Maeve Binchy, this would be a marvelous place to begin. It is set during the rise of the 'Celtic Tiger,' which we know has now fallen, rather spectacularly. The themes in Maeve Binchy's earlier books, which take place in an older Ireland, are wrapped up with the Church and social conventions. These modern Irish people are not bound by the old traditions, and are making their way into a new world. A perfect book, in my estimation.
Posted by Nan