Tomorrow, November 22, is the fourth anniversary of the day I began writing this blog, these letters. I love the idea of a giveaway on one's blog anniversary. It is such a nice way to say thank you for my dear readers. There are two books which I am offering as a giveaway this year. One was given to me by a wonderful Canadian internet friend with whom I was on an email list for a long time. She and I have stayed in touch, and recently she sent me a magical parcel of books and magazines which included a book called Fine Lines. She remembered me talking about it years ago. Since that time, I have bought my own copy so I told her that I would offer her gift as a giveaway on my blog. I did a little entry about clotheslines, with a mention of the book here. The second book is one I recently bought, called A Year With Emerson with a quote for each day of the year. 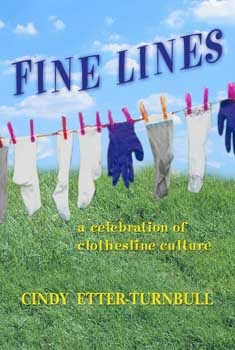 Fine Lines is a fun-filled book about a much overlooked aspect of North American culture: clotheslines. If you have ever driven through communities and noticed all the lovely laundry on the backyard lines and wondered about the colourful art of hanging up clothes, you are about to find out the stories behind those fine lines.

While other books pin their success on airing dirty laundry, this volume is a refreshing change. It's a book about clean laundry hanging in a gentle summer breeze... as well as winter laundry frozen stiff as boards on the line in the backyard. Mrs. Clothesline examines in every detail the different kinds of lines, the various hanging methods and the personality profiles of those who participate in this age-old daily ceremony. Once you've read this engaging book, you'll never look at a drying line of wash the same way again.

Cindy Etter-Turnbull writes of the unsurpassed magic of the best drying days, dos and don'ts for beginners and veterans, clothesline props, clothesline disasters and other related subject matter. Fine Lines covers it all. She includes true life accounts of clothesline tragedies and triumphs from people across the country. Fine Lines is the book that will revolutionize the way you look at laundry. It is intended for amateurs as well as professionals, men as well as women. This book will put to rest any questions you may have about the fine art of hanging out the wash.

Probably nobody knows more about clotheslines than Cindy Etter-Turnbull. Cindy, and her basket of clothes, has spent many fun-filled evenings in homes and community halls throughout Nova Scotia collecting stories and anecdotes about clotheslines. She has been featured by Stuart McLean on CBC Radio's Vinyl Café, and has appeared on Wayne Rostad's On the Road Again.

Born in Windsor, Nova Scotia, Cindy and her husband proudly possess two actively used clotheslines. Cindy spends her spare time training the family dog, gardening and trying to out-fish her husband. Her love of tradition, beauty, orderliness, and humour has led to her fascination with "fine lines."

"A chief event of life is that day on which we have encountered a mind that startled us." A Year with Emerson is a feast of 365 such days, designed to celebrate the bicentenary of the "Sage of Concord." Known throughout the world for his cogent, epigrammatic writing, admired as the "George Washington of American Literature," his work is even more piquant and enriching in bigger doses. In this delightful display of his genius, the daily almanac entries take us to the heart of his ideas and philosophy. Some were written on the very day in which they appear in the book, some are speculations and musings of the season and the natural world, but all are unfailingly wise, still relevant to our modern times.

As a philosopher, essayist, poet, and lecturer, Emerson's mind ranged across the universe even as he traveled the length and breadth of the United States and Europe. With him as a companion and guide, we meet the ideas and personalities he championed and encountered, from Lincoln to John Muir, from Carlyle to Montaigne, and, of course, Emerson's own close New England circle of Hawthorne, Thoreau, Margaret Fuller, and the Alcotts. With company like this and the scope of Emerson's vision, we can read the entries as a daily inspiration and tonic, or simply enjoy this extended daybook as a revelation of a visionary, incorruptible, and surprisingly modern mind.

Richard Grossman is a psychotherapist, medical educator, essayist, and former publisher who has been reading and studying Emerson for over forty years. He lives in Salisbury, Connecticut.

If you would like to have one of these books in your own library, you may leave your comment on any posting beginning today, November 21 through next Sunday, the 28th. It is very important that you tell me which one you want. I will draw two names on Monday, November 29, and will send the books anywhere in the world.
Posted by Nan