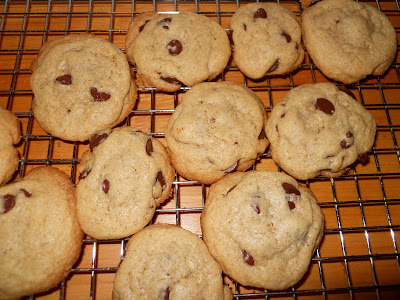 This is a perfect chocolate chip cookie recipe for when you don't want too many. It makes two dozen cookies. I got it from a magazine ad for Sugar In The Raw, sugar I have mentioned before; the one I use all the time for both white and brown. The ad is just adorable, and here is an article on Sugar In The Raw's latest ad campaign. Ah, the genius of those mad men and women.

Cumberland Packing Corp.'s new campaign for its In The Raw all-natural sweeteners is putting a twist on a familiar approach by tying recipes into humorous takes on human emotions and behavior.

The campaign, taglined "It's Only Natural," aims to convey the versatility of Sugar In The Raw and its zero-calorie counterpart, Stevia Extract In The Raw, by drawing consumers in with lighthearted commentaries on the roles that food plays in our lives.

Examples include "Cocoa brownies to heal a heart broken by a man who promises it wasn't you; it was him. And by him he means a girl named Stacey Lee"; "Chocolate chip cookies you'll bake for her birthday that she'll never try because you'll never give them to her because you'll eat them all and phone in some tulips"; and "Spiced iced coffee that has you thinking about the five bucks you spend every day on a coffee you could brew at home but know you never will except for today."

The underlying message: "In The Raw understands the changing reasons in one's choice of sweetener and provides the flexibility to choose, without sacrificing taste, naturalness and quality," sums up Steven Eisenstadt, CEO of Brooklyn, N.Y.-headquartered, family-owned Cumberland Packing Corp., whose product lines also include Sweet'N Low, NatraTaste (Blue and Gold), Sweet One, Nu-Salt and Butter Buds.

Sugar In The Raw, a turbinado sugar made from natural cane, was launched in 1970. Stevia In The Raw, introduced in 2009, claims to be absent of the aftertaste often associated with stevia products, and has shown the fastest growth in unit and dollar sales among the top five nationally branded sugar substitutes during the past 52 weeks, according to SymphonyIRI data cited by Cumberland.

The stevia product is available in a baking-bag package designed for easy use in cooking and baking, as well as in single-serving packaging.

The cookies are, of course, delicious! And they'll not go stale because there are so few you'll eat 'em up in no time.

Maybe she's having one of those days? Weeks? Sub 1/2 cup of zero calorie Stevia Extract In The Raw with 1/2 cup Sugar In The Raw for a better day. Mix hard.

Add 1 1/4 cup of flour. Yeah, the white stuff. A little bit won't hurt.
1/2 tsp. of baking soda
1/2 tsp. of salt
1/2 cup macadamia nuts - I didn't use any nuts
and 1 cup chocolate chips. Well, minus the handful (or two) you'll have already eaten.
Then stir it up - I used the Kitchen Aid
spoonfuls on the sheet - I greased it with cooking spray
and into the oven.
10 minutes later, it's Happy Birthday time. Maybe even for the birthday girl.

A fun recipe to read, and terrific cookies to bake on this snowy, foggy November day.