The Moving Finger by Agatha Christie 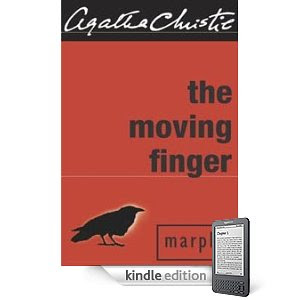 
I had such a strange few weeks of reading after finishing my beloved Scarlet Feather on October 25. I began several books which I did not want to continue. One was a mystery that just got too creepy for me though I read half of it before quitting - The Glass Devil by Helene Tursten. I tried another mystery, one from the Golden Age, but I found it so confusing, with so many characters who didn't stand out from one another, and such a boring story that I quit this one too - Death at the President's Lodging by Michael Innes. Then I began a cozy, which isn't always my favorite genre, though I do adore some. This one was a bit too romancey for me - Silent in the Grave by Deanna Raybourn. I tried another sort-of cozy, but it wasn't the first in the series, and I couldn't catch up with what was going on with the characters - A Puzzle in a Pear Tree by Parnell Hall. I read quite a bit of another mystery, and didn't care for it and dropped it - A Carrion Death by Michael Stanley. I began yet another mystery, and just couldn't get into it - Walking Into Murder by Joan Dahr Lambert. I may try any or all of these at another time, but my first attempts weren't successful.

So, who better to 'cleanse the palate' than Agatha Christie? This is the third Miss Marple novel, though she doesn't make an appearance until nearly the end. She 'solves' the mystery, but I found her to be an odd, barely fleshed out character. I'm not sure why Agatha even included Jane Marple. The book went along just fine without her, though the mystery may not have been solved!

The narrator is a most pleasant fellow named Jerry Burton who is recovering from an accident. His doctor recommends that he and his sister, Joanna rent a house in the country where nothing happens so he can get complete rest and relaxation. Well, it wouldn't be a mystery book if this was the case, would it? The little village is besieged by poison pen letters. They aren't true, but they deeply upset the bearers and their families. Doubts crop up. Could he or she really have done that? When one of these letters presumably ends in a suicide, it becomes very serious.

Sometimes I think every Agatha Christie I read is my favorite, but this one really is very, very good. It has a light cheeriness which isn't always present in mysteries. The characters are exceedingly well-drawn and memorable. I didn't have to wonder who someone was, and have to look back to an earlier appearance. The Moving Finger was a perfect reading experience.
Posted by Nan