All Shall Be Well by Deborah Crombie 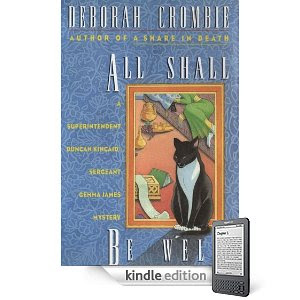 
This second in the series takes place in the building where Detective Superintendent Duncan Kincaid lives. One of his neighbors, a fifty-year old woman named Jasmine, is slowly dying. Kincaid has become quite fond of her, and his friendship means a great deal to her. When she does die, the assumption is that it was a natural death but it turns out she had asked a friend to assist her in suicide. And the autopsy shows that Jasmine died from an overdose of morphine. Was it suicide or was it murder? And if the latter, why kill a woman who was dying anyway?

Kincaid and Sergeant Gemma James become quite emotionally involved in the case as they spend time in the dead woman's home, searching for clues to why anyone would want to murder her. The author's descriptions offer the detectives and the reader a sense of who Jasmine was.

One wall held prints and Gemma went closer to study them. The center of the grouping was a sepia-tinted photograph of Edward VIII as a young man in Scouting uniform, smiling and handsome, long before the cares of Mrs. Simpson and the abdication. A memento of Jasmine's parents, perhaps?

Kincaid stopped in front of the solid, oak bookcase and contemplated the spines as if they might reveal something if he stared long enough. Books were jammed in every which way, taking up every inch of available space. Gemma joined him and scanned the titles. Scott, Forster, Delderfield, Galsworthy, a much worn, leather set of Jane Austen.
"There aren't any new ones," said Gemma, realizing what struck her as odd. "No paperbacks, no best sellers, no mysteries or romances."
"She reread these. Like old friends."

This is the sort of building Duncan Kincaid would come home to in Hampstead, London.

The silence in Carlingford Road seemed intense after the main thoroughfares, and the air in the shadow of his building still held the night's chill. 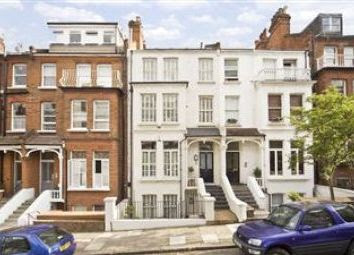 You may read the opening of the book at the author's website to get an idea of the writing, the feeling of the book. I am so loving this series, and have the third waiting on my Kindle.
Posted by Nan